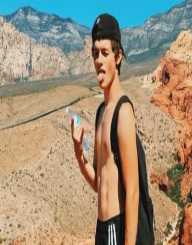 Dylan Luke Dauzat was born into a pious family in November 1997.Dylan's birth date was 2nd November, and his family lived in the American state of Louisiana at the time. He also had two other siblings who were younger than him, and they all lived with their parents. Dylan Dauzat explored options for his future by moving to LA, where he got an apartment for himself. Dylan has a cooking flair and holds himself out as the best in making the broth among his friends.

Dylan Dauzat had an early passion for baseball apart from cooking which could have been a professional career path if he was not in the entertainment world. Dylan has also held out that he possibly might have been an environmentalist as an optional career.

Dylan Dauzat made his way through school with much struggles as a result of his commitment to arts and entertainment skits. Dylan school tried to be cooperative so that he could try to make his required units. However, while Dylan was able to get As in other courses, his Fs from the English were a disincentive for him. Dylan Dauzat decided to ditch school in his senior years because of his English teacher as he felt frustrated by the poor scores he got. Dylan went for the online route and was able to complete his senior year units online with a GPA of 4.0.

Dylan Dauzat started out as an entertainer who would come up with different skits to thrill his audience. Dylan's aptitude speaks volumes about him as an all-around performer with his goofy lines on YouTube and Vine. Dylan Dauzat shot into the public reckoning with pranks on Vine and notable among these was “That one friend who can't be quiet during a prank.” He was in league with other pranksters such as Jake and Klairty Foushe and Kayden Stephenson.

Dylan Dauzat got a gift of a video camera while in his 8th grade, and this came his way during the Christmas season. This spurred his desire to make videos, and he pinned his attraction on his inclination to make people laugh. This was to lead to his personality changes and development of his stage and screen character. Dylan Dauzat's YouTube channel debuted on 29th December 2012, and he posted his first video on 2nd April 2013. On Vine, he made his debut on 13th May 2013, and this gave him instant recognition.

Dylan's popularity soared when he amassed views on YouTube, and over time, he was able to reach the 692,000 subscriber mark Dylan's Instagram follower count is 1.4 million.

On YouTube, Dylan Dauzat series that is called ‘Cute Things Girls Do’ is top-rated. These particular series have the highest viewer ratings in his channel. Dylan Dauzat has also explored other skills and wants to be an actor apart from singing. In this regard, he has three singles, which he made with another buddy called JamieBoy.

Dylan's arrival in LA was in 2016, and this was in May. He timed his move so that he could build on his acting and singing career. Dylan Dauzat was a part of the cast on RED series on YouTube and is involved in another series plot as well.

Dylan Dauzat made a debut on iTunes when he released his song, ‘Kickin It’ on the 5th day of December in the year 2014. This was single, and he followed it up with a second one on 7th May in 2015 with ‘Mine Tonight.’ Dylan titled his first EP ‘Magnetic,’ and it hit the airwaves on June 4th, 2014 with widespread mentions on the Internet.

Dylan Dauzat earns the appellation as a self-made Internet sensation that has a soar-away reputation as a youngster and celebrity. Dylan's creativity is what has given rise to his stardom coupled with the fact that he has managed to be self-reliant, daring and courageous. Dylan Dauzat's digital imprints are such that have become a model for other would-be cyber stars to emulate on their way to fame and fortune. The print, web and television channels have given vent to his successes so that his earnings have come rolling in as his popularity grew.

The anchor for his future aspirations is the followership count he has amassed on the social media: such that is capable of becoming his springboard at any time. Dylan Dauzat loves the video game attraction, and he is hard at play with them as an avid game buff.

Dylan Dauzat dated Nicki Gruttadauria in 2016 and made it public. This was after they have been going at it for about eleven months. However, before this announcement, the internet was already abuzz with photos of the pair. This was such that made the public suspicious that they were already dating. The dating scene witnessed their exit in a matter of weeks after the public affirmation. The following weeks, Nicki claimed Dylan cheated on her and in no time, all the posts online showing both of them together were deleted. What was heard next about love and dating for Dylan, was a roller-coaster with Liora Lapointe.