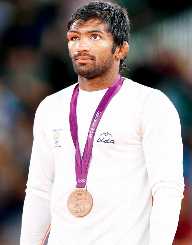 Yogeshwar Dutt was born on November 2nd, 1982 in Sonipat, India. His parents were both teachers and wanted Dutt also to follow this career pathway. However, since very young age, Dutt was interested in sports, such as wrestling. He began training in wrestling when he was eight years old. In 1992, he won school championship in wrestling, after which his parents began to support his career choices. Two years later, he participated in the international games in Poland and won the gold medal.

His career took off after Yogeshwar Dutt competed at the Commonwealth Wrestling Championship in London, in 2003, as the representative for India. He won the gold medal in the 55 kg freestyle category. In 2004, he was part of the Indian wrestling team at the Athens Olympic games, where he finished in the 18th place. In 2006, just nine days before the Asian Games in Doha, Dutt lost his father. He also attained a knee injury, but despite his physical and emotional trauma, he managed to win the bronze medal in the 60 kg category.

In 2008, Dutt qualified for the Bejing Olympics, since he won the gold medal at the Asian Championships at Jeju City, South Korea in the 60kg freestyle category. In 2010, he sustained a career-threatening knee injury and was almost not able to participate in the 2010 Delhi Commonwealth Games. However, he overcame the injury and won the 60kg title. In 2012, he qualified for the London Olympic Games by winning silver at the Asian tournament in Astana, Kazakhstan. He participated in the London Olympic Games, where he won the bronze medal at the Men’s freestyle 60kg event.

In 2015, Dutt was introduced in the Icon category by Haryana Hammers team playing in the Pro Wrestling League.