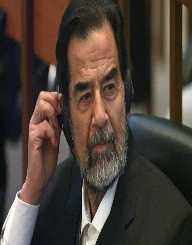 Saddam Hussein was an Iraqi politician who is best known for leading Iraq into the Iraq-Iran War, the Gulf War and the Iraq War.

Hussein was born on 28 April 1937 in Al-Awja in Iraq. Hussein never met his father and was raised by his uncle, KhairallahTalfah, in Baghdad until the age of three. After his mother remarried, Hussein moved to Tikrit. His relationship with his step-father and siblings was fraught, and Hussein returned to live with his uncle aged ten. His uncle was a defining influence in his life. Talfah had fought in the Anglo-Iraq War and was deeply nationalistic. Between his uncle and his high school, a strong nationalist fervor was fostered in the young Hussein.

In 1957 Hussein joined the Ba’ath Party a pan-Arab nationalist and socialist movement. The rise of the nationalist Abdel Nasser in Egypt sparked a wave of dissent and revolution across the Middle East. The monarchies in many Middle Eastern countries were toppled. In Iraq, Faisal II fell in 1958. The Ba’ath Party seized power in a military coup known as the 14 July Revolution.

The Ba’athists quickly fell out with their military allies as the military refused to join the United Arab Republic (U.A.R) with Syria and Egypt. In 1959, Hussein was part of a group of Ba’athists that attempted to assassinate the Prime Minister Abd al-Karim Qasim. The attack failed, but Hussein’s involvement played a key part in his rise within the Ba’ath Party. Following the failed assassination Hussein and others fled to Syria. The Ba’ath Party was strongest in Syria, and a purge of Iraqi members was carried out. Hussein fled to Egypt during the purge. The Ba’athists again seized power in Iraq following a military coup in what is known as the Ramadan Revolution. However like in 1958 there was conflict, and the President Abdul Salam Arif began expelling Ba’athists. A power struggle followed this, President Arif died when his plane crashed in suspicious circumstances, and his brother took control. Hussein at this point had returned to Iraq and been imprisoned. He escaped in 1967 and began organizing Ba’ath resistance. A bloodless coup in 1968 brought the Ba’ath Party to power again, and Hussein was deputy chairman of the Party for his role in the coup.

Hussein was the key force behind maintaining party unity and prevent splits like the ones that occurred in 1958 and 1963. Hussein seized the oil fields in Iraq, and this granted him the revenue to undertake his modernization programmes. Iraq began some social welfare programmes aimed at improving education and eliminating illiteracy. The health system and agricultural sectors were also modernized. Hussein then worked on diversifying the economy with major infrastructure projects to improve roads and develop the mining industry. These major works made Hussein famous both in Iraq and abroad. So strong was the Iraqi economy that two million immigrant workers were needed to meet the labor demand. Following the defeat of the U.A.R and Jordan in the Six Days War and the collapse of the U.A.R, Hussein championed Iraq as the leader of the Arab world standing against Israel.

Hussein then signed a friendship pact with the Soviet Union which led to attempts by the U.S.A to destabilize Iraq. American sponsored Kurdish rebels fought the Iraqi army from 1974 to 1975. Following the defeat of the rebels, thousands of Kurds were exiled, and hundreds of thousands forcibly moved to other parts of Iraq as part of an Arabization process.

Although Hussein had been the prominent force behind the party since 1968, it was only in 1976 that he began to take leadership roles. Firstly he became the General of the Iraqi Army. In 1979, Hussein assumed the presidency of Iraq and quickly began to purge the Ba’ath Party. Hundreds of high ranking members were summarily tried and executed. Hussein further strengthened his position by developing secret police and fostering a cult of personality. Hussein then began work on making Iraq the leading force in the Middle East. He denounced all Arab leaders who did not stand against the Jewish state of Israel or the radical Shia and Persian nation of Iran.

Hussein received huge amounts of military hardware from the Soviet Union and France during the 1980s and 1990s. France also helped Iraq develop a nuclear programme. Hussein made his first move for regional supremacy by launching the Iran-Iraq War in 1980. Iraq was widely supported by the West and by other Arab nations. Iraq had the superior military hardware, but Iran enjoyed huge superiority in numbers and fanaticism. The war quickly turned against Iraq, and they were largely on the defensive from 1982 onwards. Hussein ordered the use of chemical weapons against invading Iranian forces and the Kurds, who had again rebelled in support of the Iranians. Iraq denied such attacks took place, and the U.S claimed Iran had carried out the attacks. The war ended in stalemate and Iraq was devastated and heavily indebted. One of the nations Iraq was indebted to was Kuwait.

When Kuwait refused to waive the debt or raise oil prices Hussein ordered the invasion of Kuwait in 1990. The invasion of Kuwait was roundly condemned. Iraq faced an international coalition with a U.N mandate seeking to liberate Kuwait. In the Gulf War, Iraqi forces were annihilated by the technologically superior coalition forces. Hussein ordered missile attacks on Israel in an attempt to rally Arab nations to his cause, but Iraqi forces were expelled from Kuwait in February 1991. Hussein kept Western civilians in his presidential palace as human shields against aerial attack.

Following defeat in the Gulf War Iraq became a pariah nation and was blockaded. Hussein began playing up his the idea that his Muslim Iraq had stood against the West. Hussein sought to foster radical Islamic opposition to the West. Following the September 11th attacks in America, Iraq topped the list of terror sponsors that would be dealt with. A coalition led by the United States failed to receive a mandate and used trumped-up allegations of Iraqi possession of weapons of mass destruction as the excuse for an invasion of Iraq in 2003. Iraq was quickly overrun, and Hussein went into hiding. Hussein was captured in December 2003 and put on trial in 2004. Hussein was tried for and found guilty of crimes against humanity and sentenced to death. Hussein was hanged and died on 30 December 2006.

Saddam Hussein was married three times. His first wife, Sajida Talfah, and Hussein had five children together, Uday, Qusay, Raghad, Rana, and Hala. Hussein married his second wife, Samira Shahbandar, in 1986 and they had one child together. Hussein married for a third time in 2002, marrying Nidal al-Hamdani.