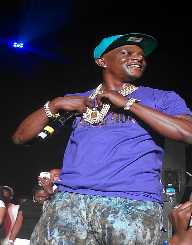 C- Murder, whose real name is Corey Miller is an American rapper, actor, and songwriter. C-Murder has released a total of nine albums together with six distinct labels; TRU Records, No Limit Records, Koch Records, Asylum Records, RBC Records and Venti Uno. His first album, 'Life or Death' was released in 1998. Currently, C- Murder is serving a life sentence for being charged with second-degree murder of Steve Thomas, a teenage fan in 2002. Despite being in prison, Corey Miller has written several novels including; ‘Bound by Loyalty’ and ‘Death Around The Corner.’

C-Murder was born on March 9, 1971, in Louisiana, Orleans. He is the younger brother of the president and found of 'No Limit Records' Master P. He is part of the strongest rappers in the 'No Limits Family.'

C- Murder first appearance on limelight was after featuring in some ‘No Limit’ releases. In 1998, he released his Life or Death album which was in the top 3 on the US Billboard 200. In just the first week, he had sold over 197 000 copies. The album eventually sold over a million copies which made it become certified by RIAA.
Corey Miller released his next album Bossalinie in 1999. This album dropped with a hit, being ranked number two on the Billboard 200 with 175 000 copies sold in the first week. 'Like a jungle' and 'Gangsta Walk,' are among the singles which promoted this album.
He released his third album, ‘Trapped in Crime’ in 2000.'Down for My N's' is one of the singles featuring Snoop Dog that is well known to date. The album was number three on the Billboard 200. During this time he was given a major role in the film, ‘No Limits.’
Miller released his fourth album, ‘P- 3.com’ in 2001. This album fell to number forty- five on the Billboard 200. It did poorly as compared to his first albums. 'I'm Not Just' and 'What U Gonna Do' are some of the songs in this album.

On February 28, 2002, Corey Miller was arraigned by a Jefferson Parish Grand Jury for the second-degree murder of Steve Thomas, a 16-year-old at Platinum Club in Harvey, Louisiana. He was found guilty and sentenced in 2003. Judge Martha Sassone, however, reversed the sentence after a few months and granted Miller another trial based on her new findings. While waiting for the new trial, he was put under house arrest.

His fifth album, ‘The Truest Shit I Ever Said’ was released in 2005. He was still under house arrest at this time. Singles in this album featured the famous B.G. The album got ranked at number thirty-four on the Billboard 200.

In January 2007, Corey Miller released his first novel, 'Death around the Corner.'
'Screaming for Vengence,' his sixth album was released in 2008 while he was still under house arrest. His sentence had not been made yet. Being promoted by singles like 'Be Fresh' and 'Posted on the Block(remix),' the album got ranked number 133 on the Billboard 200.

August 2009, Miller's trial began again; the jury had come to a 10-2 guilty conclusion. Even after going back and deliberating on the case for a little longer, the jury's verdict remained the same. He was sentenced by Judge Liljeberg to life imprisonment on August 14, 2009.

Corey Miller continued to record while in prison and in December 2009, he released his seventh album, 'Tomorrow.' He released a mixtape, ‘Ricochet,’ while in prison. The next year he got featured in Lil Boosie's song, 'Came to 2 Da Can' which caused so many controversies due to Miller's negative statements about his brother, Master P.
He released his ninth album on March 24, 2015, ‘Ain't No Heaven’ In the Pen, which featured Snoop Dog, Calliope Doofus, All, Big Be, Bloc Boyz, Boosie Badazz, Lil Kann, Lil Souljia Slim and Jigga. In 2014, he released two other novels; 'Red Beans and Dirty Rice for the Soul' and 'Bound by Loyalty.'
Corey Miller made many appeals which got declined. In April 2016, he made an album 'Dear Supreme Court,' where he talks about his case with the hope of the court dropping his charge. Miller is currently serving his conviction at Louisiana State Penitentiary in Angola.