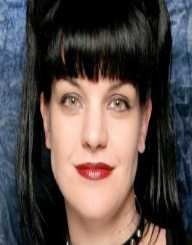 Pauley Perrette is an American actress who is best known for playing Abby Sciuto in the crime show NCIS.

Perrette was born on 27 March 1969 in New Orleans. As a child, Perrette moved a lot with her family. At the different time, she had lived in Louisiana, North Carolina, South Carolina, Georgia, Alabama, Tennessee, New Jersey, New York and California. Perrette had a keen interest in science and crime as a child. Perrette graduated from Crestwood High School in Georgia and went to Valdosta State College also in Georgia. Perrette studied criminology. When Perrette moved to New York, she began studying at the John Jay College of Criminal Justice. To help pay for her tuition Perrette worked as a bar attendant. It was a colleague of hers at the bar where she worked that introduced her to a talent agency.

Perrette began appearing in some TV commercials and short films while working as a bartender. She then started working with an agency and landed a large number of appearances in commercials. With the upturn in the amount of acting work, she decided to relocate to California. Perrette appeared in ten episodes of Murder One an American legal drama on the NBC station. Perrette also appeared in all six of the episodes of the short-lived sitcom, That’s Life. She played Cecilia Wiznnarksi in all nineteen episodes of Time of Your Life, a drama that starred Jennifer Love Hewitt. Perrette also had a minor role in the 2000 film Almost Famous.

Perrette played the public relations person for Alice Cramer in season two of Special Unit 2. The show was a sci-fi comedy based on a unit of the Chicago Police Department made up of mythical creatures. The next year Perrette appeared in two episodes of the thriller 24. She also had a role in the 2002 film The Ring and did voice work in the animated film, Brother Bear.

In 2003, Perrette landed her best-known role that of forensic scientist Abby Sciuto in the Naval Criminal Investigative Service unit portrayed in the CBS show NCIS. As well as appearing in the main series Perrette has also appeared in the Los Angeles and New Orleans spin-offs of the show. In 2014, Perrette suffered an allergic reaction to the hair dye used by her character on NCIS and had to be hospitalized.

Perrette married Coyote Shivers in 2000, and the couple then divorced in 2004. Perrette had to file a restraining order against her ex-husband as he abused her sexually, emotionally and physically. She became engaged to cameraman Michael Bosman, but they called off their engagement. She later got engaged to former British marine Thomas Arklie.

Perrette has been involved with some charities such as the American Red Cross as well as some civil rights and LGBT groups.

Perrette is a Christian and is a member of the Hollywood United Methodist Church.