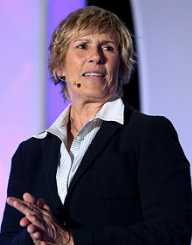 Diana Nyad is an American distance swimmer, journalist, and publisher. She holds the hold of swimming across the channel unaided from the Cuban island to Florida.

Diana Nyad was born in New York in August 1949. Her original name was Diana Winslow Sneed. She is the daughter of William Sneed Jr. and Lucy Winslow Curtis. In 1952 she saw her parents’ divorce when she was only three years. Mary Curtis remarried Aristotle Nyad. Aristotle, a Greek-Egyptian by heritage, legally adopted Diana. She became Diana Nyad. She moved with her parents from New York to Florida.

She enrolled at Pine Crest School graduating in 1967. She got admission at the Emory University to study a degree course. When she was expelled for a daredevil jump from a fourth-floor window, she joined Lake Forest College. In 1973 she graduated from college with an Arts degree majoring in English and French.

Nyad started swimming early in life. She enrolled for competitive swimming lessons while at Pine Crest School. She trained under the watch of a former American Olympian Jack Nelson. Under his tutelage, Nyad became a record winning athlete swimmer in the Florida high school swimming competitions. She won three state high school competitions.

She switched to the more rigorous long distance marathon swimming while in college. She got the support of Buck Dawson, a renowned hall of fame swimmer from the Florida International Swimming Hall of Fame. She moved to Ontario, Canada for the marathon swimming training. Nyad participated in a few competitions setting a world record in the 16-kilometer swimming competition in Lake Ontario. In 1974 she competed in Italy. Nyad set a new women’s record in the Bay of Naples swimming competition. In 1975 she became the first woman to swim around Manhattan New York, setting a record of eight hours. She continued with her endurance training and set a new record by swimming from the Bahamas to Florida in 1979. She became the first woman to swim a record of 102 miles in 27 hours and 30 minutes.

Nyad took a break from swimming in the early 1980s. She became a sports journalist for various sporting programs. Some of the programs were Wide World of Sports, The Score, and One on One with Diana Nyad.

Nyad lost her mother in 2007. She returned to marathon swimming as a coping mechanism to deal with the loss. She set her eyes on the shark-infested Florida Bay. In 2011 she made the first attempt of swimming across from Cuba to Florida unaided at the age of 62. Nyad tried the same fate in 1977 but was hampered by bad weather, jellyfish stings and a bout of asthma attacks.

After several tries, she finally got her breakthrough. On September 2, 2013, she swam across from Havana in Cuba to Key West in Florida. Nyad swam across a stretch of 110 miles in two days without the aid of any protective gear in the shark-infested waters. She succeeded in conquering her dream on her fifth trial at the age of 64.

She is also a recipient of several honors from her former schools and other organizations for her input in the world of swimming.

Apart from being a revered swimmer, Nyad is also a respected book author and publisher. She started writing in the early 1970s. In 1978 she published Other Shores. Some years later in 1981, she published Diana Nyad’s Basic Training for Women. She published Boss of Me: The Keyshawn Journey, in 1999. She released her private memoirs titled Find a Way in 2015. In the book, she explored her swimming journey up to her conquering of the Havana to Florida swimming record.

Ironically, Nyad quotes anger as the driving force behind her success. She was sexually abused by her initial swimming coach. She delved into competitive swimming in a bid to overcome her agony. On her personal orientations, she is a self-declared atheist, and lesbian.

She participates in charities to fundraise for various causes. In 2013 she helped in the construction of a swimming pool in New York. Nyad has also fundraised to help victims of numerous hurricanes and other natural disasters.

Diana Nyad is the epitome of self-motivation and overcoming challenges, conquering her dream at the age of 64.