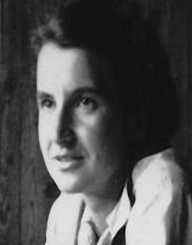 Rosalind Franklin was born on July 25th, 1920. Her place of birth was in London, England. She studied for her Ph.D. at the Cambridge University and that she majored in physical chemistry. She was one of the pioneers to crystallography X-ray diffraction. With the skills she gained from her classes, she went on to apply them to DNA fibers. The structure of DNA could now be well understood through the photographs that she provided. Later on, scientists would rely on her works as evidence when supporting the DNA models that they were coming up with. As a result, Rosalind Franklin took credit for a discovery that would change lives throughout the coming generations.

Rosalind Franklin was born in 1920 to a wealthy family. Her father, Ellis Arthur Franklin worked as a teacher. On the other hand, Muriel Frances Waley was her mother. Franklin was the second child of the couple who had five children in total. The little girl was intelligent right from the very beginning, and when she was in her teens, she knew that she wanted to become a scientist.

For her junior education, Franklin went to some schools situated in West London, Brook Green, and Sussex. With her academic excellence, she managed to earn herself a scholarship that would see her through higher education. In 1938, Franklin joined Newnham College located in Cambridge. Chemistry was where her interest lied, and she did not hesitate in pursuing the subject at the institution. Years later in 1941, she graduated from the college with second-class honors. This meant that she was a qualified candidate to be employed in the field of her choice. Soon, Franklin got employed as a research assistant at British Coal Utilisation Research Association.

She later migrated to Paris after the war came to an end. Here, she went to work with Laboratoire Central des Services Chimiques de l'Etat. This was a research team of 15 members being led by Jacques Mering who was a French engineer. It was while working with Mering that Franklin learned more about X-ray diffraction. Later on in her career, the knowledge gained here would be imperative in her discovery of the DNA’s structure.

In 1950, Franklin was fortunate enough to work with King's College London. A year later, her scientific prowess got her to work as an associate in the biophysics unit. The process was to be directed by John Randall. Because she had earlier learned more about X-ray diffraction, the director chose her to work on DNA fibers specifically. Raymond Gosling was to be the Ph.D. student offering assistance to her while working. It is while working together that Franklin and her Ph.D. student made their DNA discovery. They realized that there were two types of DNA, i.e., dry "A" type and wet "B" type. From their historic discovery, the X-Ray diffraction picture on the “B” type gained recognition as later on it was used as evidence detailing the DNA’s structure. To gain this picture, it took 100 hours of exposing the DNA fibers to the X-Ray machine.

Rosalind Franklin did not get married during her lifetime.

It was in 1956 that Franklin made a terrible discovery on her health and wellbeing. She had ovarian cancer. This discovery prompted her to undergo experimental chemotherapy. In addition to this, she was operated three times with the hopes of remedying her health condition. Her health deteriorated with time, and it contributed to her early death at the age of 37. She passed away on April 16th in 1958.