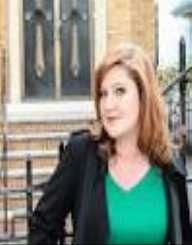 Allison Robicelli was born on August 1, 1980. She is an American baker and author. She is also a television personality. She is a co-writer of the book titled ‘Robicelli’s: A Love Story, with Cupcakes.’ She co-wrote the book with her husband, Matt. In 2008, she and her husband established gourmet food and sandwich shop. They later closed the shop due to financial difficulties.

Allison Robicelli was born on August 1, 1980, in Brooklyn in the United States of America. Her love for food was influenced by the Sunday dinner she experienced at her paternal grandmother’s home. She started her career as a catering chef and worked like that for several years. She also started a cake business in her parent’s house. The business was a success, and later on, she became a pastry chef only for some time. In 2005, she met Matt who is a food industry veteran. In 2006, she got married to Matt with whom she has a son, Atticus.

In 2008, Matt and Allison established gourmet food and sandwich shop in Brooklyn. They wanted to run their own business since they had worked for other people for a long while. They later faced financial difficulties hence they were forced to close shop. In 2009, they had their second son, Toby. Matt ran the shop while it was still operating while Allison took care of the kids at home. After they closed the shop, they started a cupcake business which started well.

In 2012, Allison Robicelli extended her hand in helping the people who had been affected by Hurricane Sandy with food. She also collected basic needs that the people needed at her family’s Bay Ridge Apartment. Her charitable traits earned her the Star of Brooklyn Honour. In 2013, she and husband released their cookbook ‘A Love Story, with Cupcakes.’ In the same year, Allison participated in the Food Network Show ‘Chopped’. She and her husband later opened a bakery in Bay Ridge. She continues working with her husband in making cupcakes that are loved by many.