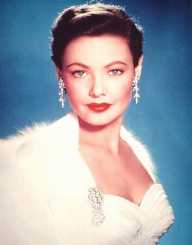 A Beauty Caged in the Prison of the Mind: Gene Tierney

Gorgeous American actress Gene Eliza Tierney was the second child of Howard Sherwood Tierney and Belle Lavina Taylor. She was born on 19 November 1920, in Brooklyn, New York, USA. Her father was of Irish descent and worked as an insurance broker while her mother was a physical education instructor. Gene grew up in a comfortable and privileged household. She had two siblings, an elder brother named Howard Sherwood ‘Butch’ Tierney Jr. and a younger sister named Patricia ‘Pat’ Tierney.

Hailing from an affluent family, Gene Tierney attended some of the best institutions. She began her formal education at St. Margaret's School in Waterbury, Connecticut, and later attended the Unquowa School in Fairfield. After that, she moved to Europe and took admission in the Brillantmont International School in Lausanne, Switzerland. She stayed in Europe for two years and became fluent in French. In 1938, Gene returned to the US and got enrolled at Miss Porter’s School. During her school days, she published her first poem titled ‘Night’ in a school magazine. She was fond of poetry and occasionally wrote lyrics all throughout her life.

It was a family vacation to the West Coast that introduced Gene Tierney to the field of acting. During the holiday, she, along with her family, paid a visit to her cousin who worked as a producer at the Warner Bros. Studios. One look at the 17-year-old green-eyed beauty was enough to have caught the attention Director Anatole Litvak. He suggested that she should become an actress. However, her father was against the idea of her becoming an actress and prohibited her from signing a contract with Warner Bros.

Gene Tierney was destined to embrace a quiet social life just like her family. However, she got fed up with the social life and decided to pursue her ambition of being an actress. She took up a course in acting at a small Greenwich Village acting studio in New York. Initially, she was guided by the director and actor Benno Schneider. Later, she became a pupil of Broadway producer-director George Abbott.

Gene Tierney's father wanted her to pursue acting in legitimate theatre only. Hence, she started off her acting career via Broadway. Her Broadway debut happened in 1938 with the play ‘What a Life!’ Where she portrayed the role of a water carrier. In 1939, Gene played the role of Molly O’Day in the Broadway productions ‘Mrs. O'Brien Entertains’. All her performances were warmly received by the audiences and critics alike who found her to be pretty and refreshingly modest.

With her theatrical performances, Gene Tierney managed to convince her parents about her acting potential. Eventually, they allowed her to venture into films, and her father established a company called ‘Belle-Tier’ with the aim of funding and promoting her acting projects. Gene’s motion picture debut came in 1940 with the role of Eleanor Stone in Fritz Lang's western ‘The Return of Frank James.’ She was cast in a supporting role opposite Henry Fonda. In the following two years, she had her pockets full with films and consecutively appeared in different films like ‘Hudson’s Bay’ (1941), ‘Tobacco Road’ (1941), ‘Belle Starr’ (1941), ‘The Shanghai Gesture’ (1941). She also acted in ‘Son of Fury: The Story of Benjamin Blake’ (1942), ‘China Girl’ (1942) and ‘Rings on Her Fingers’ (1942).

In 1944, Tierney starred in the lead role in the film ‘Laura’ opposite Dana Andrews. Her intense portrayal of an uncanny murder victim established her as the superstar of Hollywood and became the best-remembered role of her life. In the following year, she came up with yet another outstanding performance as the narcissistic and covetous femme fatale named Ellen Berent Harland in the film ‘Leave Her To Heaven.’ Her magnificent performance in the film earned her an Academy Award nomination for Best Actress.

In 1951, battling with depression and other mental health issues, Gene Tierney continued to do films like ‘The Mating Season’ and ‘Close to My Heart.’ But her appearances in films began to dwindle owing to her aggravating health and personal problems. She bounced back in 1962 with the film ‘Advise and Consent.’ After that, she appeared in several films and television shows and ultimately took retirement in 1980. In 1979, her autobiography titled ‘Self-Portrait’ was published which has descriptive accounts of her life, career and her battle with mental illness.

Gene Tierney was a chain smoker and suffered from severe mental health issues including manic depression. She was admitted to several mental health institutes where she was given shock treatments to tranquilize her. But, she found that the procedures did her more harm than good and damaged parts of her memory. In later life, she became a staunch opponent of shock treatments.

In 1943, during her first pregnancy, Gene got infected by rubella. It was believed that she contracted the disease from a fan she had met at the Hollywood Canteen. As a result of the infection, her first-born daughter Daria suffered congenital damage and was born as deaf, partially blind and severely mentally retarded.

Gene Tierney eloped with costume and fashion designer Oleg Cassini and got married to him on June 1, 1941. Her parents were against the unison as Cassini was from a Russian-Italian family and was born in France. The couple had two daughters named Antoinette Daria Cassini and Christina Tina Cassini. The marriage ended in divorce in 1948.

During her separation and post her divorce, Gene dated many eminent personalities like John F. Kennedy and Prince Aly Khan. However, none of the romantic involvements ended in marriage. Ultimately, on July 11, 1960, she got married to Texas oil baron W. Howard Lee in Aspen, Colorado. Tierney and Lee stayed together until the latter’s death in 1981.

Gene Tierney was suffering from emphysema, and she breathed her last on November 6, 1991, in Houston. She was entombed at the Glenwood Cemetery in Houston.