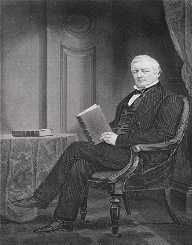 Millard Fillmore was born on January 7, 1800, in Summerhill, New York, USA. He came from a low-income family, his parents being simple laborers named Phoebe Millard Fillmore and Nathaniel Fillmore. He was the second of nine children in the family, and he worked hard to make ends meet.

Since he came from a low-income family, Millard Fillmore did not get much of a school in his childhood and teen years. It is believed that he could do some essential reading, writing, and math, but not much than that. He likely learned how to read from his parents and self-teaching by using the Bible and other books, rather than with formal education.

When he was 19, he enrolled at New Hope Academy. It was there where he got some of the most critical formal education of his lifetime. Here he met a Miss Abigail Powers, firstly his teacher, but who later became his wife.

After attending the New Hope Academy, he studied law with the Country Judge Walter Wood. Here, he got his start in a law career.

Once finishing his study of law, Millard Fillmore worked at a law firm for some years before leaving to become a teacher. He did this for several years before breaking out into politics.

While in politics, Fillmore helped to set up the University of Buffalo. He was named the first Chancellor of the school in 1846.

Throughout his political career, Millard Fillmore changed his political viewpoint. He started out as part of the anti-Masonic party. Later, he formed a friendship with Henry Clay and Thurlow Weed, other prominent US politicians, who urged Fillmore to join the Whig party.

Millard Fillmore became the United State’s 13th president after the death of Zachary Taylor in 1850. Fillmore would not be the first president of the Whig party, but he would be the last. He did not have much in common with the former president, as their political beliefs were very different. The two did not even meet until after the election, and they were so bitter towards each other that Fillmore did not get to do much until after Taylor died.

Once president, Fillmore got rid of all of Taylor’s former cabinet members and replaced them with his friends and favorite politicians. This caused a dramatic shift in the political scene in the White House.

During his time as president, he made some changes, including the following:

The Compromise of 1850, Opening up trading with Japan through the Treaty of Kanagawa, Supporting the Fugitive Slave Act, Refusal to expand slavery to the Caribbean islands

All of the changes he made, even though Millard Fillmore believed them to be good, made him an unpopular president. He ran for president under the new Republican party, since the Whig party no longer wanted him, but he did not win.

Millard Fillmore suffered an apparent stroke in 1874. This lead to health complications and other diseases. He passed away on March 8, 1874, in Buffalo, New York, USA.