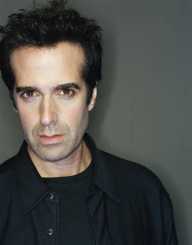 Magician David Copperfield was born on the 16 September 1956 in Metuchen, New Jersey. He was an only child and as a boy became interested in magic, which helped him overcome shyness. By the age of twelve, Copperfield was a competent conjurer and was kind enough to become the youngest member ever invited to join the Society of American Magicians.

David Copperfield rose to fame when he was cast in the lead of The Magic Man, a musical comedy. The show was widely acclaimed and subsequently became the longest-running musical ever in Chicago.

Copperfield created and performed in the Broadway production of Dreams and Nightmares. The show broke Broadway’s record for some tickets sold in a week.

Project Magic, a programme that uses magic as therapy, was developed by Copperfield. The plan is medically certified and is used in hospitals around the world.

In 1991 David Copperfield purchased the Mulholland Library of the Conjuring and Allied Arts. Copperfield expanded the collection when he bought the Cole collection, and today it is known as The International Museum and Library of Conjuring Arts. The museum is not public and is invitation only, with access reserved for fellow magicians and collectors.

Awards that David Copperfield has won include a Living Legend Award from the Library of Congress, the Society of American Magicians Magician of the Century and the King of Magic and 21 Emmy Awards. Copperfield has a star on the Hollywood Walk of Fame, and in 2015 he was inducted into New York City’s Ride of Fame.

David Copperfield was engaged to German model Claudia Schiffer from 1994 until 1999. His current partner is Chloe Gosselin. The couple has a daughter, Sky (b.2010).

Copperfield owns eleven islands and exclusive resorts in the Bahamas which are known as The Islands of Copperfield Bay.