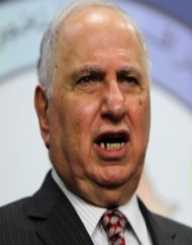 Ahmed Abdel Hadi Chalabi was born on October 30th, 1944. He was an active Iraqi politician who managed to serve as the deputy prime minister. This is a post that he served for a period of one year from May 1st, 2005 to May 20th, 2006. During his political career, he founded the Iraqi National Congress (INC). He was famously known as a controversial figure primarily for his relations with the United States. This earned him the nickname “Washington of Iraq.”

Ahmed Chalabi was born on October 30th, in 1944. He was born in a wealthy family named Shia. His place of birth was in Kadhimiya, Iraq. Political tensions in Iraq made his family migrate to the United States. He spent the better part of his life in both the United Kingdom and in the US. Chalabi went for his college education at the Baghdad College and later enrolled with Seaford College which is situated in England.

While in exile, Ahmed Chalabi pursued his western education at the Massachusetts Institute of Technology. Here, he pursued his Bachelor of Science degree in Mathematics alongside the famous cryptographer named Whitfield Diffie. In 1969, he gained his Ph.D. in mathematics. This was the University of Chicago.

Being a bold and wise investor, Ahmed Chalabi was good in business. However, he was often pointed fingers at for his corrupt deeds. In 1977, Chalabi paired with the King’s brother named Crown Prince Hassan to open up the Petra Bank. In 1989, orders from Mohammed Said Nabulsi, Governor Of Central Bank of Jordan made their newly opened bank collapse. Nabulsi had required all banks in Jordan to make reserve deposits of up to 35%, and Petra Bank was not in a position to do this. This led to its failure. Investigations carried out by the bank revealed false accounting and therefore attracted a bailout fine of $350 million. Chalabi escaped the country. He was exiled and was to be jailed for 22 years if at all he was seen in Jordan again.

While living in exile in the UK, Ahmed Chalabi formed the Iraqi National Congress (INC). His mains idea behind the formation of this party was to instigate a new regime in his home country. His quest for insurgency after linking up with the Washington DC failed as the commanders collaborated with Saddam to destroy his uprising revolt. Regardless of this, Chalabi continued with his persuasion that Saddam Hussein had weapons of massive destruction. This prompted the attack by the US in 2003. Around this time, his INC party was paid approximately $33 million by the United States Department. The Defense Intelligence Agency also paid the party a monthly figure of $335, 000. Nonetheless, this stopped in 2004.

In 2005, Ahmed Chalabi served as the deputy prime minister and the acting oil minister. Two years later, Nouri al Maliki, the Iraqi Prime Minister appointed him to serve as the chair of the Iraqi services committee.

Ahmed Chalabi died on November 3rd, 2015. He suffered a heart attack leading to his demise at the age of 71.