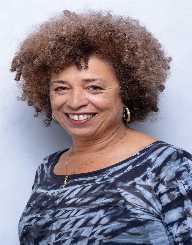 A civil rights activist, a great scholar, a prominent counterculture activist and radical are just a few of the words that many people have used to describe the famous African-American professor Angela Davis.

Throughout her career as an activist, Davis has fought for the rights of the blacks, women, prisoners as well as the lesbians, gay and transgender in the society.

Angela Yvonne Davis was born on 26th January 1944, in Alabama, Birmingham, United States. It was here that she was also brought up by her upper middle class parents.

Angela Davis's father Frank Davis owned and operated a service station in the same area while her mother was an elementary school teacher.

Her mother was also in the political scene early in her life, when Angela was still young and was the organizer of the Southern Negro Congress.

Angela Davis was enrolled and later graduated from Parker High School in Birmingham, Alabama. Here, she experienced discrimination; through this, she learned about racial prejudice, and this made her organize interracial study groups when she was still a teenager. The groups were, however, broken up by the police.

In 1959, Angela Davis was enrolled at Elizabeth Irwin High School in Greenwich Village in New York where she further broadened her knowledge. She was introduced to the concept of communism here. Later in the 1960s, she went to study philosophy at Brandeis University in Waltham, Massachusetts before enrolling, as a graduate student, at the California University, San Diego in 1968.

Angela Davis joined groups such as the Black Panthers and the Che-Lumumba Club, an all-blacks bunch of the Communist Party. She also studied at the University of Frankfurt.

Angela Davis started working at the University of California, Los Angeles as an assistant professor of philosophy. During this period, she has actively involved in the Black Panther Party as well as the Communist Party, USA.

This landed her in problems with the school administration. They tried to fire her to no avail due to her intense fight in court against them. She, however, left in 1970 after she was fired for using inflammatory language as her contract had also expired.

President Ronald Reagan also did seek to ban her from teaching in any University in California.

In the early 1970s, George Jackson, a 17 years old black prisoner, while trying to escape from jail in San Quentin, was found with a weapon and Davis was believed to have given it to him.

As a result, charges were placed on her, and this made her flee for her freedom. The FBI listed her name among the most wanted criminals.

Angela Davis was later arrested in New York and put in jail until her trial after which all the charges against her were withdrawn.

Upon her release, Angela Davis continued speaking actively against feminism, the condition of the prisons and other institutions including the universities. Even though she had been barred from teaching in all the prominent universities, she resumed teaching at the San Francisco University in 1972.

Angela Davis also worked as African-American studies lecturer at the Claremont Colleges before teaching women and ethnic studies at the University of San Francisco.

Angela Davis. Is still a professor and teaches courses on the history of consciousness at the University of California, Santa Cruz where she joined in the year 2007.

Apart from her academic work, Angela Davis also supported the three inmates, famously known as Soledad brothers who were faced with murder charges against a corrections officer. One of the three, George Lester Jackson, made an escape attempt during his trial in August 1970.

The result was a massive death in the courtroom and again, several charges, including murder, were brought up against Angela Davis and she was once again put in jail for around 18 months until June 1972 when she was acquitted.

Angela Davis. was elected the Communist Party’s vice-president for two terms, first in 1979 and again in 1984. As the vice president, she tried to convince the radicals to come together and throw their support behind the Democratic Party.

Angela Davis is also known as an author and more so for her books like Women, Race, and Class (1980) and Are the Prisons Obsolete? (2003). Between the year 2003 and 2013, she has given lectures in various Universities and Colleges including the Agnes Scott College (2003), Howard University (2008), Gustavus Adolphus College (2013), Trinity University, Texas (2010) among others.

Angela Davis was awarded the Lenin Peace Prize in1979 in the Soviet Union. She was also awarded an honorary professorship at the Moscow State University. Other awards she received include the Blue Planet Award (2012) at the Pitzer College, for her work in the field of humanity and the American Book Award.

In the late 1960s, Angela Davis in Out Magazine declared herself as a lesbian and also fought for the right of lesbians and gays in the society.

However, Angela Davis has a male spouse, named Hilton Braithwaite. She currently lives in Santa Cruz, California and continues with her passion for teaching.