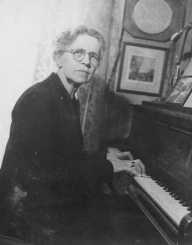 French composer, conductor and organist Juliette Nadia Boulanger was born into a musical family in 1887 when her mother was thirty and her father seventy-two. She had a sister Lili who was also musical. Ernest Boulanger, her father, was a voice instructor at the Paris Conservatory.

Nadia Boulanger started studying music at the Paris Conservatory at the age of ten, and she was a pupil there between 1897 and 1904. A talented student, Nadia Boulanger won prizes for counterpoint, fugue, harmony, organ, and accompaniment. While still a student, her elderly father died, and in 1900, she started supporting the family by performing and teaching. In 1906, she became Gabriel Faure’s assistant at the Eglise de la Madeleine in Paris, France.

In 1908, Nadia Boulanger entered the Prix de Rome and came second. The following year she took part in the competition again, but she did not win although she was expected to take the prize.

After 1913, Nadia Boulanger concentrated on teaching and conducting although between 1901 and 1922 she composed almost thirty pieces. Nadia Boulanger was highly critical of her compositions, and after her sister, Lili died in 1918 Boulanger changed her focus and composed less.

Nadia Boulanger made her debut as a conductor in 1912. She subsequently became the first woman to conduct the New York Philharmonic Orchestra, the Boston Symphony Orchestra and the Philadelphia Orchestra in the United States.

In England, she conducted the Hallé Orchestra of Manchester and the BBC Symphony Orchestra. She was the first woman to conduct a concert of the Royal Philharmonic Society (1937).

As a teacher, Nadia Boulanger taught pupils from all over the world including America and Australia. Her first teaching job was at the Conservatoire Femina-Musica in 1907 in Paris, France. She also taught at the Ecole Normale de Musique de Paris from 1920. In 1921 she joined the Conservatoire Americain at Fontainebleau, a summer school which was initially set up during WWI by the US for training their bands. Her teaching heavily influenced some of her pupils including Quincy Jones, Walter Piston, Roy Harris and Virgin Thomson. In 1948, she became the director of the Conservatoire Americain. She also taught at the Longy School of Music and the Paris Conservatoire.

During WW 2 she moved to America and taught at Wellesley College, Radcliffe College, and the Juilliard School. In later years she taught at the Yehudi Menuhin School in England, The Royal College of Music and the Royal Academy of Music.

As a teacher and mentor, Nadia Boulanger had a widespread influence on composers in the 20th Century. Awards she received include The Chevalier to the Legion d’honneur (1932), the Order of Polonia Restituta (1932), Foreign Honorary Member of the American Academy of Arts and Sciences (1962) and the Order of the British Empire.