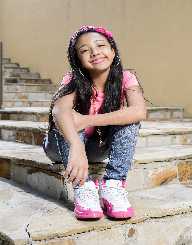 Jayla Marie has loved music since before she could even dance or sing! She recorded her first song before she even started kindergarten! She began to make up her dances when she was about five years old. Ever since then, Jayla Marie’s whole life has been about music.

When Jayla Marie was only six years old, she began to work as a child model. Some of the groups she has modeled with are J Crew and Ralph Lauren. Jayla Marie stopped modeling when she was eight years old. She currently seems to have no plans to model shortly, but her cute looks and sense of style could very well help her to gain a modeling career again as she gets older.

Jayla Marie has her own YouTube channel called TheRealJaylaMarie. On this channel, she posts videos of herself rapping and dancing. Some of the most popular videos on her channel are her rapping videos. These are different from other rap videos. She makes covers of famous rap songs but edits out the swears and another dirty language so that other kids can listen to the songs. Jayla Marie strives to make rap more family-friendly so that more kids her age can enjoy rap music like she does. Her channel is famous with kids and young teens. Some of her most famous covers are of the songs Somebody, and I’m That Kid. She has millions of combined views on her many videos and over 65 thousand subscribers on her channel.

Jayla Marie was lucky enough to be chosen for the rap competition television show, The Rap Game. The show first premiered on Lifetime in 2016. Jayla Marie participated on the second season of the show. So far, there have only been three seasons. Jayla Marie gave it her all, but she did not win.

She did gain some valuable experience while on the show, like working with famous rappers. The loss hasn’t done anything to ruin her love of rap. If anything, her experience on the show has only made her love rap that much more!

The WorldStarHipHop Foundation is a charity that Jayla Marie is a part of. Jayla Marie loves giving back to the community, and she wants to do everything she can do help with social issues around the country. This foundation is known for giving children school supplies. The foundation is centered in New York, where most of the donations are also given. Popular rappers like LL Cool J help to hand out supplies, give autographs, and help families. Like Jayla Marie, the rappers in his group also love to give back to their community. The group encourages kids to be all they can be, which is a message that Jayla Marie has taken to heart.