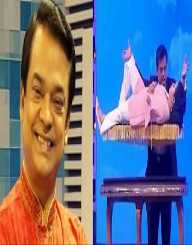 Jewel Aich is a Bangladeshi magician and a celebrated performer in his home country, Bangladesh.

Jewel Aich was born in Pirojpur in East Pakistan (modern-day Bangladesh) on 10 April 1950. Aich’s father, B.K Aich, was a businessman who had nine children of which Aich was the fifth born. Aich suffered from ill health as a child, mostly severe headaches, and this made it hard for him to socialize with other children. During the long days alone as a child, he began to practice magic. A gypsy man performed magic in Aich’s village when he was a child, and the performance so enthralled the young Aich that he began to pursue magi enthusiastically. As well as magic the young Aich played the Bangladeshi instrument the bansuri, a type of flute.

Although Aich performed his magic tricks in front of friends and family as a young boy the idea of becoming a professional magician did not occur to Aich until he read a book by P.C.Sorkar. Sorkar was a famous Indian magician. Aich studied at Jagannath University in Dhaka. Even by his time in university Aich had developed a reputation as an entertainer.

Bangladesh had been joined with Pakistan since the British withdrawal from the Indian subcontinent in 1948. Calls for self-determination grew throughout the 1960s, and in 1971 the Pakistani military began a crackdown. The Pakistani military looted Aich's home and his family was forced to flee. After the looting of his home, Aich joined the war for independence and took up a combat role. His poor health ultimately saw him restricted to a non-combat role. He entertained other troops with his magic and worked as a teacher in refugee camps. The war ended in December of 1971 with India joining Bangladesh and forcing Pakistan to surrender. Bangladesh became an independent country.

Aich continued his magic after the war and continued to become well known in his area. He became known in America when news clippings of Aich’s performances were circulated. In 1981 he was invited by the Society of American Magicians to perform for them. Thousands of American Magicians attended the show. In 1997, he appeared on a Bangladeshi TV show hosted by Abdullah Abu Sayeed. The show was so well received he became a regular feature on Bangladeshi TV. Aich also performs live shows in major cities across the globe. Aich is also well known for his bansuri playing. Because, of his headaches, which worsen when he plays, he designed a specially curved bansuri so he can keep his head straight while he plays. He played bansuri on the American singing contest TV show Voice of America. Aich also gives regular bansuri performances on Bangladeshi radio.

Aich is married to Bipasha Aich, and they have one child together.

Jewel Aich received the EkusheyPadak in 1993. This is Bangladesh’s second highest civilian award, and it is awarded for achievements in culture and the arts.