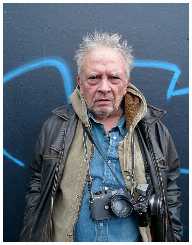 David Bailey is a renowned British photographer whose fame reached its peak during the "Swinging London" era. Bailey is known as one the first real celebrity photographers during the 1960s. Besides refraining from drinking alcohol, Bailey is also known as a long-time vegetarian.

The 1996 film Blow-Up, which is directed by Michelangelo Antonioni, was loosely inspired from his life.

Bailey married four women in the course of his life. His first marriage was to Rosemary Bramble in 1960 followed by Catherine Deneuve, who was an actress, in 1965. He divorced Deneuve in 1972 and three years later, married Marie Helvin. Helvin worked not only as a fashion model but a writer as well. The couple went their separate ways and his latest marriage was to Catherine Dyer. Bailey and Dyer tied the knot in 1986.

In line with his marriages, Bailey has three known children namely Fenton, Sascha, and Paloma. Fenton works as a television producer while his other son Sascha is an art curator.


The Struggles Of A Dyslexic Child

He was born to parents Herbert and Sharon Bailey on January 2, 1938, at Leytonstone, located along the East Side of London. They moved to East Ham when young Bailey turned three. His father worked as a tailor's cutter while his mom worked as a machinist.

Growing up, Bailey struggled with undiagnosed dyslexia that led to difficulty during his schooling. Because of this, he often struggled with his studies. Bailey enrolled at a school in Ilford called Clark's College where the teachings exhibited there barely covered the basics of a regular school. Aside from being dyslexic, he is also known for having a developmental coordination disorder or motor skill disorder dyspraxia.

He ultimately left school at the age of fifteen and decided to work as a copy boy at the Yorkshire Post's Street Fleet offices. Aside from those, he also did a variety of odd jobs before he was called to serve his military duties in 1956 at the National Service. He served for Singapore under the Royal Air Force in 1958 and he was discharged in August of the following year.

Prior to his job as an assistant to John French, he worked as David Ollins' second assistant where he earned £3.50 a week before being called for an interview at French's office.

Bailey's work at Vogue brought him a lot of exposure and soon enough, models and artists alike were lining up to work with him for photo shoots. He cemented his presence in the industry with Terence Donovan and Brian Duffy when they created the trend "Swinging London", a revolutionary and chic culture centered on hedonism and modernism.

Bailey is well-remembered in the fashion industry for his creative inputs and photographic talent. In 2015, he was listed as one of the best dressed British men in GQ magazine. The following year, he was the recipient of the Lifetime Achievement Award bestowed by the International Center of Photography in New York City.