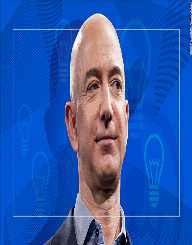 Jeff Bezos was born in Albuquerque New Mexico on the 12 January 1964 to Jacklyn Gise Jorgensen and Ted Jorgensen. Jacklyn was still in her teens when they married, and the marriage did not last long. Jacklyn remarried Mike Bezos (a Cuban immigrant who had been educated at the University of  Albuquerque) when Jeff Bezos was four. Mike Bezos subsequently adopted Jeff. Jeff Bezos was what is today known as a gifted child.

Jeff Bezos showed a very early aptitude for gadgets, contraptions, and electronics. One family story is that he dismantled his crib with a screwdriver.  As a teenager, he was fascinated by computers and was a keen Star Trek fan. Showing pioneering entrepreneurial spirit, he started his first business The Dream Institute at the high school in Miami.

Jeff Bezos attended primary school in Houston Texas spending the fourth to sixth grades at  River Oaks Elementary School. It was at this school that Julie Ray, who was researching the gifted education movement in Texas, was introduced to Jeff Bezos. Her subsequent book Turning On Bright Minds: A Parent Looks at Gifted Education in Texas describes the young, articulate and already formidably intelligent twelve-year-old. In the book, Julie Ray recalls a comment one teacher made about the boy and the grade level he was performing at “I really can’t say” the teacher replied “Except that there is probably no limit to what he can do, given a little guidance:”

When the Bezos family relocated to Miami, Florida, Jeff Bezos went to Miami Palmetto Senior High School. He excelled at this school receiving a National Merit Scholar award and became the high school valedictorian. During this time he took part in the Student Science Training Program at the University of Florida and received a reward for this.

His time at Shaw was prosperous and secure, but in 1994 Jeff Bezos decided to take a risk. He instinctively knew that the internet was about to revolutionise commerce. The idea of selling things online was an entirely new concept in 1994, but he completely grasped the implications. Bezos choose to focus his initial online sales on books. His logic was that books presented a sensible, practical item to start with.

Even at that early stage, Jeff Bezos envisaged that in future, selling almost anything online would become feasible. In other words, he was a visionary. About this attitude, The Everything Store became what is known as a Jeffism, and it is also the title of a book, The Everything Store: Jeff Bezos and The Age of Amazon by Brad Stone. This book, which was written with the cooperation of Bezos, catalogues the rise to fame of one of the most commercially successful men of his generation.

Driven by his belief in the future role that the internet would play in commerce, Bezos founded Amazon in 1994. His parents were supportive but a little dumbfounded that their brilliant son had decided to abandon the security of his career at Shaw. Notwithstanding their concerns, they dug into their savings nest egg. Moving to Seattle, the start-up that would become Amazon began in the Bezos family garage. The reason for the move to Seattle was related to a Supreme Court ruling that decreed that mail order companies were not under obligation to collect sales tax in states where they did not have a physical presence. So it made sense to avoid California and New York.

Jeff Bezos was pivotal in the development of e-commerce. The birth of the Amazon online store in 1995 heralded a period of online shopping innovations including customer pages, reviews, shopping carts, and reviews. Later the Kindle and then the Kindle Fire, a product that Bezos promised would rival the Apple iPad. Amazon web services was another innovation.

Amazon’s success allowed the founding of aerospace company Blue Origin in 2004. Bezos stated aim for this company was to get the highest number of people into space travel at the lowest possible cost.

Jeff Bezos was named Time Magazine’s Man of the Year in 1999. Carnegie Mellon University awarded him an honorary doctorate in Science & Technology in 2008. US News & World Reports elected him one of America’s best leaders. In  2011, he received an Innovation Award from The Economist for the development of the Amazon Kindle. In 2012 he was named Businessperson of The Year by Fortune.

The National Retail Federation cited Amazon as the top retailer of the year in 2012 and awarded Bezo the Gold Medal Award in acknowledgment of distinguished services to the industry.

Areas of funding activity by the Bezos Family Foundation include Medicare Research, Education, and Science. The parents of Jeff Bezos run the foundation.

Some ex-employees have criticised the culture at Amazon claiming it a harsh, controlling environment to work in and a company that puts profits before people.

Jeff Bezos met his wife when they were both working at Shaw. MacKenzie Bezos was born in San Francisco in 1970, attended Princeton University and is a respected novelist. In the early days of Amazon, she did the books. They have four children and live in Seattle.

In 2017 Jeff Bezos appeared in the movie Star Trek Beyond, playing a Starfleet official.