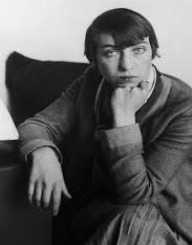 Berenice Abbott was an American portrait and documentary photographer.

Bernice Alice Abbott was born on July 17, 1898, in the city of Springfield, Ohio. Her mother was Lilian Alice Bunn, and her father was Charles E. Abbott. After their divorce, she lived with her mom while her three older brothers lived with her dad.

Berenice Abbott enrolled at Ohio State University and dropped out after two semesters. She moved to Paris and joined the Academie de la Grande Chaumiere. She also briefly attended the Prussian Academy of Arts in Berlin. During this time, she decided to change her name to Berenice, the French version of Bernice.

Some of her works were displayed at the Premier Salon Independent de la Photographie. Her portraits were published by magazines such as Vogue, Vu, and The Little Review. In 1927, she took a picture of photographer Eugene Atget. He died a few months later, and she bought his entire collection. She continued to promote his work over the next few decades, making him internationally famous.

Berenice Abbott moved to New York City in 1929. She changed her focus from portrait photography to documentary photography. She started taking photos of buildings all around Manhattan. In 1933, she began teaching at the New School of Social Research. In 1935, the Federal Art Project hired her to head the “Changing New York” project. She took hundreds of pictures of the city, which were then exhibited at the Museum of the City of New York. She had solo exhibitions at the Julien Levy Gallery and the Hudson D. Walker gallery.

Berenice Abbott spent the next few years traveling around the U. S. and photographing the architecture in small towns. She left New York City and moved to the town of Monson, Maine. She started inventing devices for photography, such as the distortion enlarging easel and the telescopic lighting pole. She developed and sold them through her company, called House of Photography.

From 1958 to 1960, she made a series of photographs for a physics textbook, sponsored by the Physical Science Study Committee. She contributed to books such as The View Camera Made Simple, Magnet, Motion, and A Portrait of Maine.

Berenice Abbott publicly identified as a lesbian. She was in a relationship with art critic Elizabeth McCausland for over three decades.

Berenice Abbott died of a respiratory illness in her home in Monson on December 9, 1991. She was 93 years old. She was buried at the New Blanchard Cemetery.

Berenice Abbott's work is the subjects of papers written by Julia Van Haaften, Gaelle Morel, and Meredith Ann Shimizu. Her photographs are part of the permanent collection at the New York Public Library, the Smithsonian American Art Museum, the Jewish Museum of New York, and the Cleveland Museum of Art.