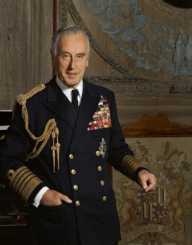 Lord Mountbatten was initially home schooled before attending Lockers Park School, Hertfordshire. He was accepted into the Royal Naval College, Osborne in 1913. After WW I, he studied for an engineering degree at Christ’s College, Cambridge.

During Lord Mountbatten served in the Royal Navy on the HMS Lion and the HMS Elizabeth. At the end of WW II, he held the rank of sub-lieutenant. Then in 1920, he was promoted to Lieutenant. He steadily rose through the ranks and by 1928 he was made a Commander, becoming a Captain in 1937.

Out the outbreak of Lord Mountbatten he was Captain of the Battleship Kelly and carried out a number of successful operations before the ship was sunk by German bombers in the Mediterranean in 1941. By now regarded as an able leader, he was given command of the HMS Illustrious. The same year he became Chief of Combined Operations. Then two years later, he was made Supreme Allied Commander South East Asia where he was involved in the Burma and Singapore campaigns. At the end of WW II,Lord Mountbatten was a rear-admiral.

Lord Mountbatten was appointed Viceroy of India in 1947. His role was to organise and execute the withdrawal of the British from India and including overseeing the formation of Pakistan and the independence of India.  After partition, he became India’s first Governor General, a role he held until June 1948.

After his role of Governor General ended in 1948, Lord Mountbatten was made commander of the first cruiser squadron in the Mediterranean. In April 1950, he became Second-In-Command of the Mediterranean Fleet, and later that year he was appointed the Fourth Sea Lord at the Admiralty. By 1952, he was Commander-in-Chief of the Mediterranean Fleet and finally, full admiral. From the mid-1950s until the end of the decade he was the First Sea Lord and Chief of the Naval Staff at the Admiralty. He was also chief of the United Kingdom Defence Staff as well as chairman of the Chiefs of Staff Committee between 1959 and 1965.

He married Edwina Ashley in 1922, and they had two daughters, Patricia and Pamela. Lord Mountbatten was assassinated while spending the summer of 1979 at his holiday home, Classiebawn Castle, in Mullaghmore in County Sligo, Ireland on the 27 August 1979. An IRA bomb planted on his boat killed Mountbatten. It also resulted in the death of his young grandson Nicholas Knatchbull, who was fourteen. A local boy, Paul Maxwell who had been employed as a boat boy also died. Another person on the boat Baroness Brabourne (82), his daughter’s mother-in-law, died the day afterwards.

Lord Mountbatten was Prince Philip, the Duke of Edinburgh’s uncle and was also a second cousin once removed of Elizabeth II.