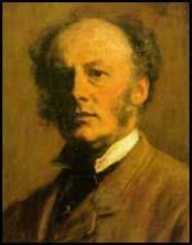 John Everett Millais was born on 8th June 1829 in Southampton, Hampshire, in England.

John Everett Millais was born to John and Emily Millais, a wealthy couple, based in Jersey. Although Millais spent much of his childhood in Jersey, the family moved to London when he was young. They moved so his parents could meet contacts at the Royal Academy of Art.

Millais's mother loved the arts as well as music, and she encouraged Millais to develop his talents. The Royal Academy accepted Millais when he was eleven, which was unheard of. While at the academy, he met Dante Gabriel Rossetti and William Holman Hunt. The three young artists established the Pre-Raphaelite Brotherhood (PRB) in 1848.

Millais's earlier works proved controversial. These included Christ in the House of His Parents (1849-50). Another early work that Millais achieved great success with was A Huguenot (1851-52). The painting was of a young couple who's separation was imminent due to religious conflict. Other paintings during this period were Ophelia (1851-52), and Mariana (1850-51).

John Everett Millais became friends with a critic named John Ruskin. Millais met Ruskin's wife, Effie. She modeled for one of his paintings called The Order of Release. The pair fell in love. Although married to Ruskin for several years, Effie was a virgin. She filed for an annulment of her marriage, which was granted in 1855. She then married Millais. The couple had eight children together.

John Everett Millais changed his painting style after he married. Ruskin criticized the new method. The style was broader than his previous works. Critics suggest it was because Millais needed to produce work much more quickly to support his growing family.

Some of his works throughout the 1870s include The Two Princes Edward and Richard in the Tower (1878). Others are The Northwest Passage (1874) and the Boyhood of Raleigh (1871).

Millais also painted children, and the works were very successful. His other works included many landscape paintings, which he did predominantly from 1870 to 1892.

His artistic talent included illustrating for books and magazines like Good Words. In 1853, Millais became an associate member of the Royal Academy of Arts. A short time later, he became a full member.

In 1885, Queen Victoria made him a baronet. This made Millais the first artist to receive the honor of a hereditary title. The Royal Academy elected Millais as President in 1896 after Lord Leighton died. Millais died on 13th August 1896 from throat cancer.

After Millais's death in 1896, the Prince of Wales commissioned a statue of Millais. He did this through the memorial committee that he chaired. In 1905, the statue stood in front of the National Gallery of British Art. The director tried but failed to have it removed in 1953 and again in 1962.

The statue moved to the side of the building in 2000 to the new Manton Road entrance.151,000 people visited in 2007 when the museum displayed a retrospective of Millais. Amsterdam and Japan then showed the exhibit and had more than 660,000 visitors.