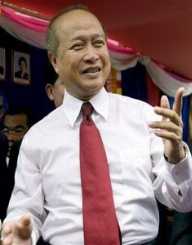 I will never cease to say that life gives us the unexpected returns. You can aspire to be a pilot, but in return, you become an inspirational politician. This is what happened to Norodom Ranariddh. He is famously known as an active politician and a Cambodian prince. Throughout his life, he has spent more than two decades in the field of politics. Even then, this wasn’t his calling he wanted to pursue medicine. But his great-grandmother, The Queen of Cambodia believed that he would come to rule her seat. He agreed and obeyed where he went ahead and pursued law, but he wasn’t willing. He eventually dropped his law career where he embarked politics. As a member of the royal family, politics wasn’t as easy as it seemed. In the mid of 1990s, he embraced his test of times. Read along to understand more about his life achievements.

On January 2, 1944, Norodom Ranariddh was born in Phnom Penh in Cambodia to King Norodom Sihanouk. He enrolled at Norodom School where he later moved to a boarding facility in 1958.After completing his high school studies in 1961, he joined University of Paris. He then returned to Marseille since he hated Paris livelihood. He majored in law at the University of Provence where he completed his Mater’s and Bachelors in Law. In 1974 he completed his masters from the same University.

Norodom Ranariddh didn’t wait to look for any vacancy or job, his work was to complete his studies, and the rest came knocking. He served as the interior minister in 1969, but he was later fired in 1970.After two years, he worked at a research center where he also left in 1979 to chase his teaching career. He returned to his former University where he taught constitutional law and political sociology. Before leaving, he served as an associate professor in 1983.
His political journey started in 1983 when he teamed up with Cambodia’s FUNCINPEC party. He was selected as inspector-general in 1985 under ANS party. He was later promoted to serve as the commander in chief of the ANC.He continued to familiarize himself with politics through FUNCIPEC party and in 1992 he was selected to vie for the party’s presidency where he won.

Norodom Ranariddh was convinced by his party members to compete for Cambodian general election in 1993.He wasn’t interested in vying for the seat, but he obliged to the core. Luckily his party won in May 1993.He accepted himself as the King of Cambodia, and he selected Hun Sen and Ranariddh as the First and Second Prime Minister. Everything went as planned till in 1997 where Ranariddh was caught trying to import sizable weapons. He was sent to exile in Bangkok due to several disagreements. He was later convicted in 1998 and sentenced to 29 years behind bars. But he was later released under Norodom father’s regulations.

From 1994 to 2006 Norodom Ranariddh managed to form the Cambodian Development Council. Besides, he had already approved seventeen developmental projects in his country. His absolute economic rules helped to develop other neighborhood countries. He came up with his party called Norodom Ranariddh Party as well as the Community of Royalist People’s Party in 2014.Both sides meant tons to him since they both defined his devotion and determination.

In 1993 Norodom Ranariddh was given a Senior Prince royal title. He then received the Grand Officier dans l'Ordre de la Pléiade award in France. He later garnered the Grand Order of National Merit in 2001.

In 1968 Norodom Ranariddh married Eng Marie. The couple was blessed with three children: Sihariddh, Rattana Devi, and Chakravuth. The couple parted ways in 2010 where it was announced that Norodom Ranariddh had an occurring affair with Ouk Phalla. Phalla gave birth to his two children, called, Ranavong and Sothearidh.