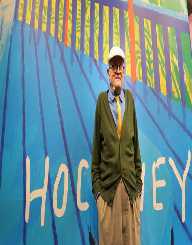 Born on July 9, 1937, David Hockey is a British painter, printmaker, and photographer. He is also a draughtsman and stage designer. With his insightful works, David Hockey is seen as one of the prominent British artists of the 20th century. David Hockey is seen as a significant figure in the pop art movement in the 1960s. David Hockey did a series of paintings of swimming pool in a realistic manner in the acrylic medium which was virtually new then. He picked on this inspiration during a visit to California.

Born on July 9, 1937, Bradford, West Yorkshire, England, David Hockney is the fourth of five children of Laura and Kenneth Hockney. He started his education at the Wellington Primary School, and the progressed to the Bradford Grammer School. David Hockey then pursued arts at the Bradford College of Art and Royal College of Art in London. According to him, being at the Royal College was just like home, and it created a serene atmosphere for him to concentrate on Arts. While there, he and colleague Peter Blake partook in the Young Contemporaries exhibition. That was the beginning of Pop art which David Hockey associated with even though he did more of expressionist themes. After his refusal to a final graduation easy, the Royal College of Arts refused to graduate him in 1962.

David Hockey, however, protested, saying it is an art school and therefore must be assessed through artwork. He, therefore, made the sketch title Diploma in protest and upon seeing this, the College changed its regulations and awarded him a diploma.

David Hockey started his career with prints, portraits and stage designs in 1968. He made portraits of family and friends and stage designs for La Scala, Royal Court Theatre, Glyndebourne and the Metropolitan Opera in New York. When designing stages of opera and ballets, David Hockey uses music as the underlying factor in selecting his colors due to his synaesthesia disorder. Through listening to music, David Hockey sees synesthetic colors in response to the music stimuli and selects the colors accordingly.

During his stay in Los Angeles in 1965, David Hockey was offered a deal by the print workshop Gemini G.E.L  to supply a Los Angeles-themed lithographs which accepted by supplying ready art collection. In California, David Hockey moved from using oil paints to acrylic paint which he really applied in brilliance. In the 1980’s he came out with what he called Joiners, which was a form of photo collages. David Hockey started this process with Polaroid prints and later 35mm commercially processed color prints.

David Hockey came out with the etching which was inspired by themes in Wallace Stevens’ poem. He created The Blue Guitar: Etchings consisting of about 20 portfolios, including The Man with the Blue Guitar published in 1977 by Petersburg Press. David Hockey designed the cover and pages for the French edition of Vogue which was to be released in December 1985 and the cover of British Telecom telephone directory for Bradford in 1989. David Hockey has since then done several works like Bigger Trees NearWarter which was measured 15 feet by 40 feet and hanged in the Royal Academy’s Summer Exhibition. It has since 2008 been donated to the Tate Gallery in London.

David Hockey also uses the Brush, an application on iPhone and iPad to create portraits, still life and landscapes for his family and friends. David Hockey painted the Yosemite National Park, California in 2011 using his iPad and also designed a large scale picture, 176 sqm using the iPad at the Vienna State Opera as part of his exhibition at the museum in progress’ Safety Curtain.  His other works in iPad, using the Brush have been exhibited.

Aside from showcasing his works at corporate exhibitions, he tried a one-man exhibition in 1963. In 1970 David Hockey exhibited at the Whitechapel Gallery in London and the cross-generational Whitney Biennial in 2004. The National Portrait Gallery in 2006 organized the biggest display of Hockney’s portraiture work which showcased his works, like paintings, sketchbooks, print and photo collages. His works have also been exhibited at A Bigger Picture by Royal Academy in 2012, A Bigger Exhibition at the de Young Museum, 2014, at the Christie’s organized by International Head of Print, Richard Lloyd and Tate Britain in 2017.

David Hockey has gained several recognitions for his work. His painting Peter Getting Out of Nick’s Pool, won John Moores Painting Prize in 1967. In 1990 he was offered a knighthood but rejected. David Hockey was a Distinguished Honoree of the National Arts Association, Los Angeles, in 1991, had the First Annual Award of Achievement from the Archives of American Art, 1993.

David Hockey also received The Royal Photographic Society Progress medal, 1988, A Champion of Honour in 1997, the Lorenzo de' Medici Lifetime Career Award of the Florence Biennale in 2003, and was given an Order of Merit in, January 2012.