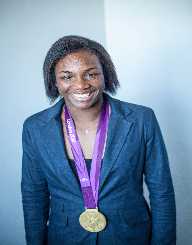 Claressa Maria Shields was born on March 17, 1995. She is an American professional boxer. She is African American. She is an Olympic gold medallist and holds various heavyweight titles. She is currently twenty three years old.

Claressa Maria Shields was born on March 17, 1995, in Flint in Michigan, United States of America. Her father, Bo Shields, introduced her to boxing when she was twelve years old. Her father was a boxer in the underground leagues before he was imprisoned. Bo was jailed when Claressa was two years old and released when she was nine years old. Claressa later met Jason Crutchfield who became her coach and trainer.

In 2017, Claressa Shields was awarded the Nickelodeon Kids’ Choice Sports Award for Biggest Powerhouse. The following year, she was inducted into the United States of America Boxing Alumni Association’s Hall of Fame.

While Claressa Shields was growing up, Shields was sexually abused by her mother’s boyfriends. At the age of thirteen, she was baptized and found comfort in the church which gave her the strength to leave home. She is currently twenty three years old.