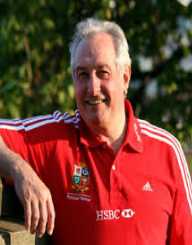 Sir Gareth Owen Edwards was a prolific rugby union player from Wales. Born on July 12, 1947, has won three Grand Slams and is among one of the few Welsh players to achieve that feat.

Several media outlets and connoisseurs of the game refer to him as the greatest or among the greatest rugby player ever. The BBC says he is "arguably the greatest player ever to don a Welsh jersey."He was very instrumental in the Welsh team that conquered European rugby during the 1960s and 1970s. Edward was honored a CBE for his service to sport during the 2007 New Year Honours. During the 2015 Queens Birthday Honours, he was knighted for his service to sport and charity.

Gareth Owen Edwards was born on July 12, 1947, in Gwaun-Cae-Gurwen to a miner. He received education from Pontardawe Technical School (currently Cwntawe Community School). While there, he took great interest in sports and benefited from the tutelage of sports teacher Bill Samuels.

A prolific sportsman, Edwards received a scholarship to Millfield Public School in Somerset. Aside from rugby, he played football and engaged in gymnastics and athletics. At age 16, he signed for Swansea City AFC.

At the age of 19, Gareth Edwards made his debut cap the Wales l rugby team in an international rugby game between France and Wales on April 1, 1967. He went on to make 53 caps for Wales, captaining in 13 of the games. At the age of 20, he captained in the 5-0 win against Scotland on February 20, 1968, becoming the youngest Wales captain ever.

Edwards had the opportunity to play alongside two of the best rugby’s best outside halves, Phil Bennett and Barry John. The Welsh team became dominant in the Five Nations Championship, with seven title wins including three grand slams. He won Wales player of the year in 1969. The BBC named him Wales Sports Personality of the Year in 1974.

The following year, he was awarded Most Excellent Order of the British Empire (MBE). Having a tremendous national team career, Edwards made his final cap match for Wales was a 16-7 win against France on March 18, 1978. That year, he was named the Rothmans Player of the Year.

Gareth Edwards played for several teams, making a professional career debut for Cardiff RFC in a game against Coventry RFC on September 17, 1966. He played 195 games within his 12 seasons with the team scoring 69 tries.

He played ten times for the British and Irish Lions including in the 1971 Lions team that won a series in New Zealand and the 1974 team that went unbeaten in South Africa.

In 1973, Gareth Edwards made a try for the Barbarians against All Blacks at the Cardiff Arms Park, which came to be known as “that try.” This is mostly regarded as the most magnificent try ever the game has seen.

Gareth Edwards alongside England and Liverpool former player Emlyn Hughes served as the team captain on the television quiz show A Question of Sports from 1978 to 1982.

Gareth Edwards was among the first fifteen former rugby players inducted into the International Rugby Hall of Fame in 1978. The 'Welsh Rugby Former International Players'Association' and First Press Events Company voted him as the "Greatest Welsh Player of all time" at a dinner at Cardiff International Arena on November 21, 2001.