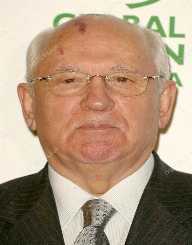 Mikhail Gorbachev was the last leader of the United Soviet Socialist Republic. His policy of restructuring or perestroika changed the country at the end of the 20th century.

Mikhail Gorbachev was born on March 2, 1931, in Privolnoye, Russia. His father Sergey was a combine harvester as well as a veteran of World War II. His mother Maria was a kolkhoz worker or collective farm worker. As a teenager, he worked with combine harvesters on large farms. He learned how to work the machines on his own and was able to contribute to the family at an early age.

When Mikhail Gorbachev graduated from high school, he did so with a silver medal. He attended Moscow University from 1950 through 1955.  He graduated with a law degree. Gorbachev earned his correspondence master's degree in 1967 through the Stavropol Institute of Agriculture. That degree qualified him to be an agricultural economist.

Even though Mikhail Gorbachev became a member of the Communist party in high school, he was granted full membership in 1952. He was a government lawyer in Stavropol before he became a ranking leader of Komsomol or the Union of Young Communists.

Mikhail Gorbachev continued moving up in ranks, even traveling out of the country for the first time as a Member of the Central Committee of the Communist Party. The young communists were looking for a change from the brutal Soviet regime of suppressed freedom of speech and controlled media. As a high ranking member of the Communist party, he was allowed many privileges that were not permitted to the millions in his country.

In 1970, Mikhail Gorbachev was the First Party Secretary of the Stavropol Kaikom. As the youngest provincial party chief, he worked to improve the basic living standard of workers in industry and farming.

As General Secretary, Mikhail Gorbachev worked on reform to be more open and efficient as a government. He increased economic development, allowed for more technological advancements to increase productivity and reduce waste, and focused on social issues such as an anti-alcohol campaign.

On an international level, Mikhail Gorbachev had  Cold War tensions with leaders of the Western world including U.S. President Ronald Reagan.  In 1987, Gorbachev and Reagan signed a treaty to destroy existing intermediate-range nuclear-tipped missiles. In the next few years, he worked on the withdrawal of Soviet troops from Russian-occupied Afghanistan.

Under his leadership, Mikhail Gorbachev restructured the legislative branch. He called for a bicameral parliament called the U.S.S.R. Congress of People's Deputies. In 1989, he was elected Chairman of the Presidium of the Supreme Soviet. In 1990, Mikhail Gorbachev was elected the first president of the Soviet Union.

Mikhail Gorbachev continued working on domestic and economic reforms, but he was dealing with a lot of issues at the same time. He focused on peace in the world and encouraged the fall of the Berlin Wall and German reunification.

Mikhail Gorbachev was also dealing with ethnic groups that sought independence from the Soviet Union. Some of those groups included the Ukrainians and Lithuanians.

Mikhail Gorbachev had a competition to lead a new Soviet government when it was fragile. He faced Boris Yeltsin in the election as Chairman of the Presidium of the Supreme Soviet and lost in 1991 though he was still President of the Soviet Union. However, while in transition, Gorbachev was taken in a military coup.

Mikhail Gorbachev was released but seen as weak compared to Yeltsin. Gorbachev resigned, giving power to Yeltsin. After that, the Soviet Union was dissolved.

Mikhail Gorbachev remained active after leaving the presidency. He established the Social Democratic Party of Russia, then resigned in 2004. In 2007, he created the Union of Social Democrats.

Mikhail Gorbachev is still a public figure in films, television commercials for companies like Pizza Hut, and even music. He released an album of Russian ballads.

Mikhail Gorbachev married Raisa Titarenko in 1953. The couple had one daughter, Irina. They stayed married until Raisa's death in 1999.

Mikhail Gorbachev is recognizable by his birthmark on his head.  The “port-wine stain” is the result of a vascular anomaly.

Mikhail Gorbachev was active in the Swiss environmentalist organization, Green Cross International. He was president of the organization in 2003.

Youngest recipient of the Order of the Red Banner of Labor, 1948

Point Alpha Prize for his role in the German reunification, 2005

President of the Soviet Union