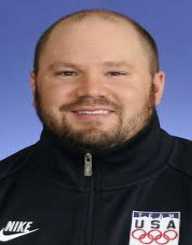 Steve Paul Holcomb was born on April 14, 1980, in Park City in Utah, United States of America. When he was a child, he got himself involved in alpine ski racing. He attended the Park City Winter Sports High School. At the age of eighteen, he tried out for the United States men’s National bobsled team and was recruited as a pusher after a fellow athlete got an injury.

In 1998, Steve Holcomb made his first World Cup race debut. In the following years, he made appearances at the tournament as a brakeman. He later became a driver after sustaining a hamstring injury hence missing out on the 2002 Winter Olympics in Salt Lake City in Utah. In 2002, he won six races out of eight races.

In 2006, Steve Holcomb made his Winter Olympics debut at the 2006 Games in Italy. The following year, he won both the two-man and combined World Cup titles. He won the titles though he was suffering from keratoconus.

The disease was slowly making him blind since his eyes were slowly losing their ability to see. His condition drove him into a depression that he contemplated suicide by having a pills overdose. In 2008, he underwent a successful surgery that repaired his eyesight.

A lens was placed just behind of each of his eyes. He, therefore, had to learn how to drive again due to the new eyesight.

In 2014, Steve Holcomb qualified as part of the United States bobsled for the Sochi Olympic Games that year. Steve and his teammate Steven Langton won the bronze medal for the two-man bobsledding event. He later participated in the four-man event at the 2014 Winter Olympic, and he and his team won the Bronze Medal. This was his last event.

In 1999, Steve Holcomb joined the Army World Class Athlete Program serving as a member of the Utah National Guard. He held the post until 2006 when he was honorably discharged. He is currently an A+ and Network + certified technician, and Microsoft certified professional. In 2012, he released his biography ‘But Now I See My Journey from Blindness to Olympic Gold.’