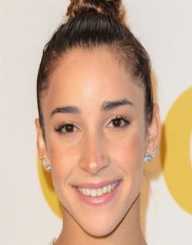 Aly Raisman is an incredible gymnast with an attractive body structure. Her natural born talent gave her an entrance as a member of 2012 Fierce Five and 2016 Final Five in the US Women’s Olympic Gymnastics team. Throughout her career, she has garnered great rewards. She has heavy-handedly contributed to her career success. As a result, she opted to give it back to society by supporting the Uniting Lung Cancer organisation.

Aly Raisman is a broad-minded, intelligent and creative persona. It has taken focus, commitment, competition, and discipline to be where she is right now. To optimize her performance, she approaches training just like any other line of work. She ranks herself as a finisher and not just an average kind of damsel. Outstanding time management gives her ample time to work on the most prioritized work.

Aly hates to respond to other people’s opinions about her life and status. One of her most significant challenges is to open her feelings to others. Moving forward are two crucial words for this athletic girl. Raisman loves to be loved and all that it is to it, but she hates consistency when it comes to personal relationships. Overall, she is typically lively, charismatic, and optimistic.

On 25 May 1994, Alexandra Rose Raisman was born in Needham, Massachusetts. Her mother, nee Faber was also a gymnast throughout her high school life. Her loving father is called Rick Raisman. Aly loves her three teen’s siblings- Madison, Chloe, and Brett.

Raisman’s gymnastics career began at the age of two. It was in 1996 that her love for gymnastics developed during the Summer Olympics. She got fond of the women team who won the gold medal. It wasn’t long that Aly joined Brestyan’s American Gymnastics Club under Silvia Brestyan’s. She upped her skill in two gymnastic levels: Excel Gymnastics and Climbing Level 8.  In 2012 she graduated from Needham High School after the completion of online classes.

It was in the mid-2009 that Aly Raisman participated in San Diego during the American Classic. She was ranked tenth in all-around. Afterwards, she was positioned 12th in all-around at the US Classic located in Lowa.

In 2010, Aly showcased her gymnastic skill in Worcester at the American Cup. She held the second title in all-around. In the mid of the same year, she participated at the Pacific Rim Championship where her team walked away with a gold medal.

From 2010 to the end of 2011 Aly polished off in a myriad of competitions including US Classic, the National Championship, World Artistic Gymnastics Championships and many more. She performed tremendously in all of the designated positions. It wasn’t a surprise that she led the captain position for her team.

Nothing seems to last forever for Aly Raisman; still, in 2011, she signed off the scholarship deal with the University of Florida. Afterwards, she refreshed a new contract with Octagon sports after giving up her National Collegiate Athletic Association qualifications. In 2013 she joined Babson College located in Massachusetts.

An exciting documentary was later unleashed in 2012. The title “Ali Raisman: Quest for Gold” sold itself to her fans. Aly opted to take a break after the 2012 Olympic Games. She returned in 2015 to compete at the City of Jesolo Trophy. Her longtime break gave her a bronze medal and gold medal for her team.

In the mid of 2016, Aly Raisman finished second when she participated at the National Championship. In the wake of the Olympic Trails, Raisman was entitled to lead the 2016 US Olympic gymnastics team.

After the Olympic Trials, she joined the 2016 US Olympic women’s gymnastics team. Aly and her incredible team accomplished their skills brilliantly. As a result, they succeeded for the next final. As an individual gymnast, she qualified for all-around, and floor exercise final.

Moving forward, Raisman proceeded to the finals at different competitions including Rio Olympics. She kept her pace on floor exercise, and balance beam. She also garnered a gold medal for US team. In 2012 and 2016 games Aly won six Olympic medals. As a result, she was named as the second best American Olympic gymnast.

In 2012 and 2016, Aly Raisman was named as a Two-time Olympian. She also garnered six-time Olympic medalist title: 3 gold, 2 silver, and one bronze. At the Rio 2016 Games, she collected the gold and silver. At the London 2012 Olympic Games, she won gold on the floor exercise and bronze for the balance beam. The most recent award is gold in 2015 plus golds, one silver, and one bronze.

Aly Raisman competed at the Dancing with the Stars season 16 TV competition and held the fourth position. At her free time, she loved hot yoga exercise. She has chained with UNICEF Kid Power where she serves as a brand ambassador. Aly seems to put her personal life out of the public eye.