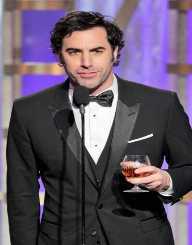 The parents of Sacha Baron Cohen were Gerald and Daniella Baron Cohen. His mother made a living in movement instruction while his father was a clothing store magnate.

Born on 13th October in the year 1971 in Hammersmith, England, he was schooled at a private school in Hertfordshire known as Aske’s Boys’ School.

His mother is of German Jewish heritage and was born in Israel while his father had Eastern Europe Jewish heritage. He picked an early interest in the performing arts and started off a breakdancing group in his teenage years. He also acted with other Jewish youths at an amateur level in those early years.

In the university, he put to use his creative instinct by becoming a member of the Amateur Dramatic Club at Cambridge University. Cohen acted in plays and is credited with roles in “Fiddler on the Roof” and "Cyrano de Bergerac".

His Launchpad was Channel 4 in the year 1995. The station was looking for talents in presentation and Cohen pitched for the role. He was accepted and hired to work on youth television projects. He became a feature on “The 11 O’clock Show by 1998 and quickly amassed a cult following. He showed up as Ali G on the show and this was to earn him a huge reputation. By year 2000, Da Ali G Show became a stand-alone feature and in 2001, Ali G Indahouse hit the shelves.

When he got attention from the U.S, he came up with a version to suit the states. He provided vocals for Julien character in the well-received animation, Madagascar in the year 2005. He also snapped up a role in Talladega Nights as the character of Jean Girard in the 2006 spin-off, “The Ballad of Ricky Bobby”.

Cohen is belter seen as a comedian for his role as Ali G. His Channel 4 roles are also always cited. He took the time to interview writers, politicians and other prominent faces on the show. His pattern was always to go for soft themes in a rather off-the-wall fashion.

His tendency to embrace the controversial has led to many people referring to him as a wacky character. His last production in 2016 was tilted Grimsby and was a box office flop. Grimsby was in a sense an assemblage of grotesques from Jeremy Kyle. That notwithstanding, Cohen has been showcased by tabloids holidaying in Saint Tropez with stars like Noel Gallagher and Boone has also been seen hanging out with pop-rock icons, U2.

In a throwback to his early years in Hollywood Hills in the early part of the decade 2000 to 2010, many remember his role in Madonna’s video for her single. He was the limo driver in the skit which did not show up in some versions of the final cut.

The most iconic role for Sacha to date is the portrayal of the boundless, no-holds-barred character of Borat. The film, Borat was a documentary slant of a man who was oversexed and plagued by child-like antics and reasoning. It suffices to say that the origins of Borat can be traced to his erstwhile Ali G Show.

The film, Borat: Cultural Learnings of America for Make Benefit Glorious Nation of Kazakhstan earned over 128m USD in global sales. In making the film, his hook was that he was making a documentary feature about America. He waded across the length and breadth of America, getting people’s opinion. He plunged into disturbing graphics, interviews and outright unacceptable antics in making the production what it was.

As the film's website explains, Borat's "backwards behavior generates strong reactions around him exposing prejudices and hypocrisies in American culture."

The vaunted satire was made possible because Baron wore the character of Borat like a garment for the entire film plot. The people who participated had no inkling that he was satirizing at any length. After the film got on the shelves, it was hit by a couple of lawsuits including one from the frat boys, who were notorious in the film.

Some respondents felt he duped them since he did not let them know that ultimately, the film will be on air in the country. When L.A Times sought Baron’s views, he stated that it was a voluntary response and he did not cajole anyone to respond in the way they did.

His role as Bruno, a fashion expert from Austria was one that upended macho men and bare-faced fashionistas. He cozied up to them with a display of blatant homosexuality.

Cohen was rewarded with a Golden Globe Award. In the Best Performance in Motion Picture category, he came out tops. He also got a nomination in the Academy Award for Best Adapted Screenplay.

It is perhaps a twist of fate that someone so vulgar in character keeps a rather private life. He and his partner, Isla Fisher from Australia, have a daughter, who was born in 2007 and in the month of October.

They spend their time together in London and Los Angeles.