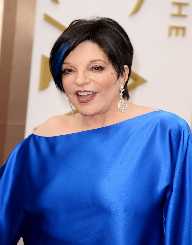 America actress, singer, dancer and choreographer Liza May Minelli was born on March 12, 1946, in Hollywood, California. Her father is Vincente Minelli, stage and film director, and her mother Judy Garland, singer and actress. Liza was practically raised in the MGM studios where both of her parents worked. They divorced in 1951.

When Liza Minnelli was 16 years old, Liza lived on her own in New York and tried to begin her career in show business. She was first recognized after her performance in the Broadway play Best Foot Forward. The show ran for seven months in 1963. Next year, she went to perform in London together with her mother, where all of her shows were immediately sold out. This performance was a significant turning point in her life since she was now recognized as a performer herself and also met her first husband.

Liza then went to study in Scarsdale High School, which she attended for one year. She starred in the school’s production of The Diary of Anne Frank and later went on a tour to Israel. When Liza was 19 years old, she won her first Tony Award for the Broadway play Flora the Red Menace.

When Liza Minnelli was 19 years old, she debuted as the nightclub performer in Washington D.C. She also started to appear in nightclubs in Las Vegas, LA, Chicago and New York. Her success as a performance led to recording three albums with Capitol Records. Later on, Minelli released albums, Liza Minelli, Come Saturday Morning and New Feeling with A&M records, and two more albums in 1973 and 1977 with Columbia Records.

In 1989, Minelli collaborated with Pet Shop Boys for their electronic music album. The following year she won the first issued Grammy Legend Award. Her latest musical appearances were in 2006 when she provided backing vocal for My Chemical Romance’s album The Black Parade. In 2010, she released the album Confessions with Decca Records.

After performing for the first time at the age of three, Liza Minnelli next starred in Albert Finney’s Charlie Bubbles, in 1967. Two years later, Minnelli played Pookie Adams, in the movie The Sterile Cuckoo. For the role, Minelli received her first Academy Award nomination.

Her best-known role was in the 1972 movie Cabaret, as Sally Brown. For the purpose, Minnelli won the Academy Award for Best Actress in a Leading Role, as well as a Golden Globe and BAFTA award.

Minnelli starred along with Robert De Niro in the 1977 musical drama New York, New York. The film gave Minnelli her signature song, which she later performed together with Frank Sinatra. In the 1980’s she played in several movie projects, but then on made fewer film appearances.

Liza Minelli has made several appearances on various TV shows. In the 1950s she appeared on Art Linkletter's show to sing and dance. In the 1960s, Minnelli appeared in several plays, including her mother’s Judy Garland Show. Later in her career, Minnelli has appeared in shows like Arrest Development, Drop Dead Diva, Graham Norton show.

Liza Minnelli appeared at the Madison Square Garden in 2001, singing with Michael Jackson at his 30th Anniversary special. In 2002, David Gest produced her show Liza’s Back. She performed in New York and London, and the show is best known for her acting her mother’s signature song Over The Rainbow. Until this time, Minnelli had declined to play it.

From December 2008 until January 2009, her solo concert Liza’s at The Palace, at Palace Theatre ran in Broadway. She has also appeared in a Snickers commercial, the movie Sex and The City 2, and NBC’s The Apprentice.

Liza Minnelli has struggled for many years with alcoholism and prescription drug addiction. Her mother died after overdosing on barbiturates, and Minnelli also started to use Valium after this. Andy Warhol noted in his diary that in 1978 Minnelli arrived at the Halston’s house and asked the host to give her every drug he has. In 1994, she entered the Betty Ford Clinic and left her musical The Rink.

In 2000, Liza Minnelli suffered from viral encephalitis. The doctors predicted that she might never speak again or perhaps spend the rest of her life in the wheelchair. Despite the predictions, Minnelli was able to recover and even perform later, by taking vocal and dance lessons.