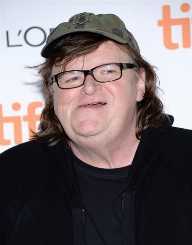 Michael Moore was born on April 23rd, in 1954. He is famous for being a documentary filmmaker as well as a satirist. Some of his most notable works include documentaries such as Bowling for Columbine, Capitalism: A Love Story, Fahrenheit 9/11, Roger and Me and Sicko. He was bestowed with an Academy Award for his work on Bowling for Columbine.

Michael Francis Moore was born on April 23rd, in 1954. His birthplace was in Flint, Michigan. His parents were Helen Veronica and Francis Richard Moore. His mother worked as a secretary whereas his father worked in the automotive industry as an assembly line worker.

For his early education, Moore enrolled with St. John's Elementary School. After this, he went to St. Paul's Seminary where he only studied for a year. With time he went to Davison High School and graduated in 1972. Moore also went to the University of Michigan-Flint but quickly dropped out after only a year of schooling.

After dropping out from the university, Michael Moore majored in writing. When he clocked 22 years old, he established a weekly paper dubbed The Flint Voice. This paper was later renamed to The Michigan Voice.

Moore joined the film industry in 1989 with the release of Roger & Me. This was a documentary that talked about the effects of the closure of General Motors which initially operated in Flint, Michigan.

A few years later, in 1992, Michael Moore released another short documentary called Pets or Meat: The Return to Flint. This documentary was closely tied with his first work, Roger & Me. In 1995, he released yet another satirical documentary titled Canadian Bacon. Shortly after, he went ahead and released Bowling for Columbine – 2002.

This documentary took a closer look into guns and violence that had greatly affected the United States. The documentary earned Moore high acclaim and that Michael Moore also bagged home an Academy Award. The piece grew in popularity over the years and that it went ahead to be credited as one of the best documentaries of all time.

Other notable documentaries that brought high acclaim to Moore include the likes of Sicko- 2007, Capitalism: A Love Story -2009, and Where to Invade Next – 2015.

Apart from directing insightful documentaries, Moore has also been active in the TV industry. For about a year, beginning in 1994, Michael Moore hosted the TV series called TV Nation. Other shows that he has featured in include The Awful Truth and Michael Moore Live.

Michael Moore wedded Kathleen Glynn in late 1991. Glynn is a film producer. Unfortunately, their marriage ended in divorce on June 17th, in 2013. Their separation was finalized the following year. Michael Moore and his former wife had one child together.