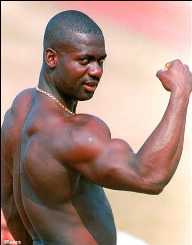 Ben Johnson was born in Jamaica and immigrated to Canada. He set consecutive 100m world records at the 1987 world championships and 1988 Summer Olympics. He trained under Charles Francis a Canadian sprinter champion.

His international recognition at winning the Olympics was short lived as he was stripped of his medals owing to doping.

Benjamin Sinclair “Ben” Johnson was born on 30 Dec 1961 at Falmouth, Jamaica. He migrated to Canada in 1976. He stayed at Scarborough, Ontario.

He trained under the prominent Canadian coach Charlie Francis who was a 100 m champion himself. Johnson also focused on the same. He improved his timing from 11 seconds in 1978 to 10.8 seconds in 1980.

Johnson won two silver medals in 1982 at the Commonwealth Games in Brisbane, Australia.

He could not achieve success in the 1983 World Championships in Helsinki since he was eliminated in the semi-finals or at the Pan American Games in Caracas the same year.

Ben Johnson won the gold in the 1986 Commonwealth Games at Edinburgh and led the Canadian relay team to win the gold. He also won a bronze medal in 200m.

In Sep 1988 Ben Johnson won the 100m at the Summer Olympics in Seoul. He improved his record to 9.79. He became the first sprinter from Canada since Percy Williams in 1928 to win 100m

Ben Johnson was invested as a member of the Order of Canada on 29Aug 1987. He was the recipient of the Norton Crowe Award for Male Athlete for the year 1985 and Lou Marsh Trophy as Canada’s top athlete in 1986.

After breaking the world record in Rome, he became a celebrity. He was a very popular athlete. He earned about $480,000 in endorsements in a month.

Ben Johnson won the Lionel Conacher award and was named the Associated Press Athlete of the year for 1987.

After winning the Olympic gold, he was congratulated by the Canadian Prime Minister Brian Mulroney over the phone for this achievement.

The great success and jubilation were however short lived as the Olympic doping control center found Stanozol a banned performance-enhancing drug in his urine and blood samples.

Ben Johnson was disqualified and stripped of his gold medal and record. The Canadian government conducted an inquiry.

Justice Charles Dublin headed this. The inquiry was televised and lasted for 91 days. Ben Johnson and his coach admitted to using drugs but said that it was used to remain on equal footing with other athletes and Ben was the only one caught.

Later six of the eight finalists of the 100m tested positive for banned drugs or were implicated later. Coach Davis in his book Speed Trap claims that Ben could not have tested positively for Stanozol because it did not suit him and he used Furazabol.

Ben Johnson attempted a comeback in 1991 at the Hamilton Indoor Games and finished second in the 50m. He, however, failed to qualify for the 1991 World Championships in Tokyo.

In 1993 he won the 50m in Grenoble, France but was found guilty of doping and was banned for life by the IAAF.

In 1999 he was hired by Al Saadi Gaddafi as a football coach to train his son. He also acted as a trainer for Argentine football player Diego Maradona in 1997.

Ben Johnson later turned to coaching and has featured in ads. He lived with his mother until her death in 2004 and then with his sister.

Ben Johnson has a daughter and granddaughter. In 2010 he self-published his autobiography entitled Seoul to Soul.

Ben Johnson now lives in Markham, Ontario spending time with his daughter and granddaughter and continues to coach.