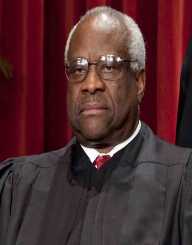 Clarence Thomas was born on June 23, 1948, to M.C. Thomas and Leola Anderson Thomas. Clarence was one of three children. His sister and brother were named: Emma Mae and Myers.

His place of birth was Pin Point, Georgia. However, he moved to his grandmother’s place at seven years old. Clarence grew up in the segregated south in the state of Georgia. He spoke Gullah- a language slaves and freedmen used. It is important because it may be what colored his view his whole life.

Clarence Thomas went to St. John Vianney, an all-black Catholic high school. He graduated and then attended the College of the Holy Cross in Worcester, Massachusetts.

While there he majored in English and became a member of Alpha Sigma Nu. In the year 1971, he graduated college with a B.A. in English Literature. Following that, he went to Yale Law and graduated in 1974 with a Juris Doctorate.

As an attorney, Clarence Thomas has a diverse history. He passed and was admitted to the Missouri Bar on September 13, 1974. After passing the bar and in the same year 1974, Clarence had a private practice while he worked as the Assistant Attorney General of Missouri.

Clarence Thomas was appointed under State Attorney General John Danforth. In 1976, he became the attorney with Monsanto Chemical Company. And the following year, in 1977, he stepped down from the Assistant Attorney General position.

Clarence moved to Washington, D.C., after he left that job. From the years 1979 to 1981, he worked for the government again as the Legislative Assistant for the Senate Commerce Committee; again for Senator John Danforth (R-Mo). From 1981 until 1982, he served as the Assistant Secretary of Education for the Office of Civil Rights in the Department of Education.

In 1982, Clarence Thomas was also appointed to be Chairman of the United States Equal Employment Opportunity Commission. He served as chairman until 1990. The reason for his leaving- the beginning of his life as a judge.

On October 30, 1989, Clarence Thomas was nominated by the president, George H W. Bush to be a Justice on the United States Court of Appeals. The district was Columbia.

He was confirmed in March of 1990. Clarence Thomas only served 19 months. Why? Because Justice Thurgood Marshall was leaving the Supreme Court of the United States and once again the president nominated Clarence Thomas. His confirmation hearing began on September 10, 1991.

You would have thought that having already been on the U.S. Court of Appeals his confirmation to the Supreme Court would be a shoo-in. It wasn’t. An interview surfaced, leaked to the press; between Anita Hill and the FBI. Anita Hill was an employee who worked with Clarence Thomas. She had to testify about allegations of sexual harassment.

People consider Clarence Thomas to be a hypocrite particularly when it comes to affirmative action programs. He believes that the laws placed to protect former slaves now freedmen are no longer needed. They are obsolete. His decisions in some cases show that mindset.

His mindset follows two similar paths. They are:

What the written law means and

He interprets the law, not makes it.

In the years of 1994-2004, Clarence was the third of the judges who had a lot of dissenting opinions.

It is said he favors following precedent or stare decisis. However, his record contradicts that based on his decision record. He will be more for overruling precedent as opposed to leaving the decisions to stand as they are and follow them.

In the 1990’s and early 2000’s Guantanamo Bay was in the public eye. And so was the Supreme Court. He allowed the government the strongest grounds to detain said criminal and enemies of the country under the law. His reason is you have to make a good effort to try and get information. However, he thought military code and detaining people at Guantanamo Bay would cause conflict.

Overall his career followed and follows a conservative model. Clarence Thomas bases his decisions on what he hears, and his understanding of the law. People like to read his opinions following a decision of the case because he writes his dissent or his concurring opinion very well. However, he has not retired yet. If as they say that the court is now more in his court, maybe the decisions will reflect that as well.

In 1971, Clarence Thomas married Kathy Grace Ambush. Although they divorced their marriage produced one son, Jamal Adeen, who was born in 1984. He then remarried in 1987 to Virginia Lamp.

The two adopted his nephew at age 6 in 1997. Virginia was a lobbyist and an aide until she retired to open her own private lobbying firm. The two are still married.

Clarence Thomas is the second African American to serve on the bench. He is also a Republican. But his party allegiance may be wavering. Currently, he follows and seems to show that he likes and prefers the Tea Party. The year is 2018 and the cases before the court are coming up soon. Many fear how the court will decide them.

But the one thing they seem to know is it’s the quiet one who currently has the ear of the court. That man is Clarence Thomas. And he may be a very important part of the end of the year decisions.