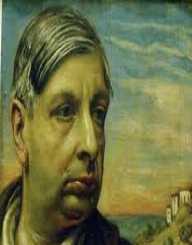 Giorgio de Chirico was born on July 10th, 1888 to Italian parents. His place of birth was in Volos, Greece. As a famous Italian artist, de Chirico is to be remembered for being the co-founder of “metaphysical painting.” His works of art during this time had a great influence on the Surrealist movement in the early 1900s. Some of them include "The Soothsayer's Recompense," "The Mystery and Melancholy of a Street" and "The Enigma of an Autumn Afternoon." He passed away at an old age of 90 years.

Giorgio de Chirico was born in 1888 in Greece. His father, Evaristo de Chirico worked as a railway engineer. Both of his parents were from different descents as his mother was a Genoan while the father was Sicilian. De Chirico interest in art made him enroll for his art studies at Higher School of Fine Arts located in Athens. In 1905, tragedy shook the family as their father passed away. Soon, their mother traveled with them to Munich. Here, Giorgio de Chirico managed to complete his art classes at Academy of Fine Arts. This was not the end of learning for him. After two years of studying at the institution, he took time to educate himself and that he showed a keen interest in the philosophical works of people like Friedrich Nietzsche and Arthur Schopenhauer. In 1908, he migrated to Italy and moved around before finally settling down in Florence.

After settling down in Florence, Giorgio de Chirico spent two years before painting his first art which featured the series of 'Metaphysical Town Square' which were yet to follow. The first painting in this series was called "Enigma of an Autumn Afternoon"- 1910. This was followed by “The Enigma of the Oracle.” In 1911, he shifted to Paris a place where Andrea, his brother also resided in. During his stay here, he managed to cross paths with renowned artists who had a profound influence on his later career.

Giorgio de Chirico’s stay in Paris brought a huge change to the artist not only to his personal life but most importantly to his career as an artist. Some major works that he worked on while residing in Paris include “The Soothsayer's Recompense"- 1913 which was followed closely after a year with "The Mystery and Melancholy of a Street"-1914. Around this period, his works of art revolved around the scenes of town squares and classical architecture.

Giorgio de Chirico later returned to Italy after the World War I began. Shortly after his arrival, he enlisted in the Italian army. Nonetheless, he was not considered to go into battle as he was physically and mentally unfit. He was stationed in Ferrara before he suffered a nervous breakdown and was taken to the military hospital. Two years later, he rallied up with Carlo Carrà. Together they brought a new light to De Chirico’s "metaphysical painting." He went on to paint his metaphysical works that were greatly admired by many. Some of them included "Love Song"-1914, "The Seer"-1915 and "The Disquieting Muses"-1917. His art depictions featured different types of day to day objects such as fruits, maps, rubber gloves, etc. His portrayal of faceless mannequins also made his work to stand out.

In 1925, Giorgio de Chirico wedded Raissa Gurievich, who was a Russian ballerina. His interest in Russian women never stopped as he went on to marry Isabella Pakszwer Far as his second wife.