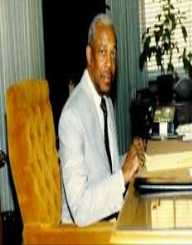 LeRoy T. Walker was an African-American coach and the first black president of the U. S. Olympic Committee.

LeRoy T. Walker was born on June 14, 1918, in the city of Atlanta, Georgia. His parents were Mary and Willie Walker. He was the youngest of their thirteen children. After his father died, he left Atlanta and moved to Harlem with his older brother Joe.

At the age of 18, LeRoy T. Walker joined Benedict College in Columbia, South Carolina. There, he played for the football, basketball, and track teams. In 1940, he moved back to New York City to obtain his master’s degree from Columbia University. He then continued at New York University, earning a Ph. D. in physiology and biomechanics.

LeRoy T. Walker first became a track and field coach at Benedict College. In 1945, he became a football and basketball coach at the North Carolina Central University. He also developed and headed the university’s first track team. He soon began working with Olympic athletes, such as Lee Calhoun, Edwin Moses, and Bruce Jenner. He also coached track teams from other countries, including Israel, Jamaica, Kenya, Ethiopia, and Trinidad and Tobago.

LeRoy T. Walker became the director of sports of the Atlanta Olympic Committee. He served as the head of the Amateur Athletic Union and became chancellor at North Carolina Central University. He was also the president of the Athletics Congress and the National Association of Intercollegiate Athletics. In 1988, he became the treasurer of the contingency fund of the Olympic Committee. He managed to raise more than 40 million dollars. In 1992, he was elected President of the Olympic Committee, becoming the first African American to hold that position. He organized the 1996 Summer Olympics in Atlanta. The event had over ten thousand participants.

LeRoy T. Walker was married to his wife Katherine until her death in 1978. They had a son named LeRoy Jr and a daughter named Carolyn.