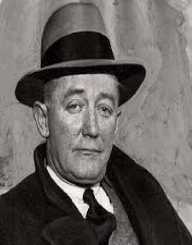 George Michael Cohan was born on July 3, 1878, in the city of Providence, Rhode Island. His mother was Helen Costigan Cohan, and his father was Jeremiah Cohan. Both of them were vaudeville performers. He had an older sister named Josephine.

George Michael Cohan's parents first put him on stage while he was still an infant. He served as a prop in their performances. He started performing by himself when he was eight years old. He danced and played the violin. In 1890, he and his family formed the vaudeville act The Four Cohans.

They spent the next ten years touring and performing around the country. Cohan wrote several songs and sketches for the family act. He also had small roles in the vaudeville show Peck’s Bad Boy and the Broadway sketch The Lively Bootblack.

In 1901, Cohan produced The Governor’s Son, his first Broadway musical. Three years later, he produced Little Johnny Jones, his first big Broadway hit. He went on to write, direct, and produce over 50 plays and musicals.

They included Seven Keys to Baldpate, Little Nellie Kelly, Get Rich Quick Wallingford, The Talk of New York and the Honeymooners, The Tavern, and many others. His 1917 musical comedy Going Up became very popular in London. He often collaborated with other producers, such as Sam H. Harris and Irving Berlin. Many of his plays received film and television adaptations.

George Michael Cohan initially acted in many of his plays. After a dispute with the Actors’ Equity Association, he stopped appearing on stage for a few years. He appeared in the silent films Broadway Jones and Hit the Trail Holiday. He later appeared in the sound films The Phantom President and Gambling. He also returned to the stage with roles in I’d Rather Be Right, The Return of the Vagabond, and Ah, Wilderness.

Throughout his career, Cohan composed over 300 songs. He used some of them in his plays and musicals. He sold the others to various producers and musicians. His song “Over There” became the most famous World War I song in the U. S.

George Michael Cohan was inducted into the American Folklore Hall of Fame, the Songwriters Hall of Fame, and the Long Island Music Hall of Fame. He earned the Congressional Gold Medal and a star on the Hollywood Walk of Fame. There is a bronze statue of him located in the middle of Times Square. The city of Providence gives out the annual George M. Cohan Award for Excellence in Art & Culture. In 1978, the U. S. Postal Service released a commemorative stamp featuring Cohan.

In 1899, George Michael Cohan married actress and dancer Ethel Levey. Their daughter, Georgette, went on to become an actress. They got a divorce in 1907. In 1908, he married the dancer Agnes Mary Nolan. Their first daughter, Mary, became a cabaret singer and composer. Their second daughter, Helen, became a film actress. Their son, George Jr, became a member of the entertainment corps.

George Michael Cohan died of abdominal cancer in his home in Manhattan on November 5, 1942. He was 64 years old. Thousands of people attended his funeral at St Patrick’s Cathedral. He was buried in a private family mausoleum at Woodlawn Cemetery in The Bronx.