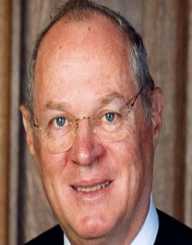 Anthony Kennedy is a political figure in the United States who served as the US Supreme Court's Associate Justice from his appointment in 1988 until his retirement in 2018. He was known for using international and foreign laws as a means to interpret the Constitution of the United States.

In 1963, Anthony Kennedy married his sweetheart; a woman named Mary Davis. The couple's union brought forth three children together.

Born in Sacramento, California on July 23, 1936, as Anthony McLeod Kennedy, his parents were Gladys and Anthony J. Kennedy. He grew up in an Irish Catholic household with his mother being an active participant to local civic affairs and a father who worked as an attorney in the Californian legislature. At a young age, he was exposed early into the world of politics which in turn made him develop an interest in the subject.

After graduating from Harvard, Anthony Kennedy set up his practice after passing the bar exams in 1962. He took over his father's practice when the older Kennedy died in 1963 and maintained his Sacramento office until 1975. It was while working in California did he make the acquaintance of then-governor Ronald Reagan. Kennedy assisted Reagan in the drafting of the tax state proposal while he was in office.

Aside from his private practice, Kennedy also served at the California Army National Guard and in 1961 and also served as an instructor at the University of the Pacific from 1963 until 1988.

Anthony Kennedy's connection and assistance to Reagan landed him a recommendation to then-US President Gerard Ford at a seat on the US Court of Appeals for the Ninth Circuit. He was sworn in on March 24, 1975. As a part of the Ninth Circuit, he became the court's conservative minority head, known for his calm and courteous demeanor.

On June 1987, Lewis F. Powell Jr. announced his retirement at the Supreme Court. With his seat being vacated, Reagan nominated Kennedy of which the Senate approved unanimously.

At the bench, Anthony Kennedy started as a conservative during his first term. He was also partly responsible for the Planned Parenthood of Southern Pennsylvania which was a significant court opinion in the early 1990s as opposed by his former conservative colleagues.

He also showed his support by casting a vote on June 25, 2015, for the 2010 Affordable Care Act or popularly known as the Obamacare under President Barack Obama's administration. The following day, the Supreme Court announced the ruling of the approval of same-sex marriage with Kennedy writing the majority's decision for the matter.

Anthony Kennedy's tenure at the US Supreme Court lasted for twenty years starting from 1988 and ended upon his retirement on July 31, 2018.

Besides being involved in politics and his occasional academe participation, Anthony Kennedy conceived an online program that aims to educate on the American values and civic traditions. For this, he collaborated with the American Bar Association, and the result was Dialogue of Freedom which is used by schools across the United States. He also aided in the development of an educational program in Iraq's judiciary that caters to senior judges.