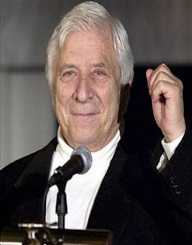 A classically trained pianist Elmer Bernstein gave his first concert at Steinway Hall in New York City when was 15 years of age. During World War II, Bernstein wrote music for drama by writing for radio shows in the U.S. Army Air Force. After the war, he continued playing classical piano but also started to do radio scoring.

He had a breakthrough when a friend, the writer Millard Lampel introduced him to the producer Sidney Buchman. Buchman then hired Bernstein to score a football film he was working one, Saturday’s Hero (1951). Bernstein later said that he obtained his first film assignment with a combination of good luck and perfect timing.

Elmer Bernstein wrote the score for Sudden Fear (1952) a film starring Joan Crawford for which won a positive critical response. During 1953, he found it difficult to obtain work until he realised that he had been graylisted because of his left-wing political views. He was not a member of the Communist Party but had written music reviews for a communist paper, the Daily Worker. He spent most of the McCarthy Era during the 1950s  graylisted.

He found work as a rehearsal pianist including doing the ballet sequences for the film Oklahoma! Originally Victor Young had been chosen to write the music for The Ten Commandments, Cecil B. De Mille film. When Young fell ill, De Mille employed Berstein. While he was working on The Ten Commandments, director Otto Preminger employed him to do the jazz score on his film The Man With The Golden Arm. In 1956, the soundtrack album of Man With The Golden Arm reached No.2 on the Billboard album charts, and Berstein became one of the most sought-after composers in Hollywood.

Elmer Bernstein was asked to do a classical score from Mozart’s The Marriage of Figaro and won an Oscar nomination for Best Adaption Score. Other musical scores include My Left Foot (1989), The Grifters (1990), Cape Fear (1991), an adaptation of the score from the original film; The Age of Innocence (1993), Keeping the Faith (2000) and Far From Heaven (2002). Bernstein’s career covered five decades, and he composed over 150 original film scores plus over 70 for television productions.

Elmer Bernstein first wife was Rhoda Federgreen (m.1942 - div.1946). He then married pearl Glusman (m.1946 - div.1965). His third wife was Eve Adamson whom he married in the mid-1960s. They remained married until his death. He had four children: Peter and Gregory from his marriage to Glusman and Emilie and Elizabeth with Adamson. Elmer Bernstein died of cancer on the 18 August 2004. He was 82 years old.

To encourage and assist in educating young people, Elmer Bernstein donated to the school he had attended in New York City. He also assisted in establishing the Young Musicians Foundation. He founded the Film Music Collection.