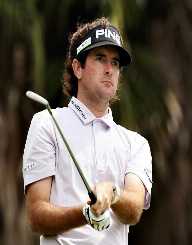 American professional golfer Bubba Watson was born on the 5 November 197 in Bagdad, Florida.

Bubba Watson played golf at Faulkner where he was a junior college All-American. He later moved to the University of Georgia, who were the defending NCAA champions at the time. Watson played for the Bulldogs (2000-2001), and in 2000, the team won the SEC championship.

In 2003 Bubba Watson turned professional and participated in the Nationwide Tour (2003-2005). He qualified for the PGA Tour in 2006, achieving 90th overall with earnings of $1,019.364. Watson also led the tour in driving distance. At the 2007 US Open, he was in the final group and finished in a tie for fifth place. On the 27 June 2010, Watson had his first PGA Tour victory in Cromwell, Connecticut. In January 2011, he had his second PGA Tour event win at the Farmers Insurance Open. He went on to win the Masters Tournament in 2012 and again in 2014. In 2015, Watson was placed second in the world golf rankings.

Bubba Watson is married to Angie, and the couple has two children, Caleb and Dakota.