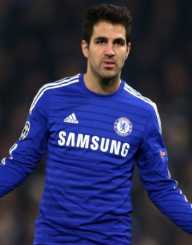 Spanish professional footballer Francesc "Cesc" Fàbregas Soler, the youngest player to have participated as a member of the Spanish World Cup team as well as for the premier professional soccer club of England Arsenal, was born on May 4, 1987, in Arenys de Mar, Barcelona, Catalonia. His father Francesc Fàbregas Sr. operated a property company, and his mother Núria Soler owned a pastry company. His father, himself a soccer player, became his first coach after noticing the extraordinary talent, enthusiasm, and passion displayed by his son from an early age.

A diehard fan of the legendary Spanish football club FC Barcelona since his childhood, Cesc Fàbregas, as he is known to the world, went to witness his first football match escorted and accompanied by his grandfather when he was nine months old. He joined club football in 1995 by becoming a member of CE Mataró at the tender age of eight. His grit, determination, dedication and the mental toughness was amply demonstrated by his hard work and careful choice of diet, preferring fish, fruits, and vegetables over fast food from a very young age.

In 1997, at the age of 10, Cesc Fàbregas joined La Masia, the youth academy of FC Barcelona, a reputed budding ground for young talents of football prodigies. He got the opportunity to train with the likes of Lionel Messi and Gerard Piqué while playing as a defensive midfielder in the youth academy.

In the 2003 FIFA U-17 World Championship of football held in Finland, Cesc Fàbregas led his team Spain to a second-place finish and showcased his talent with an awe-inspiring performance by earning both the Golden Ball and Golden Boot award for being the best player and the top scorer of the tournament. On September 11, 2003, Fàbregas joined the premier league club of England, Arsenal in their youth academy.

On October 28, 2003, Cesc Fàbregas became the youngest player in the history of Arsenal to have appeared for the first team of the club having made his debut appearance against ‘Rotherham United’ in a league cup tie. He made the record at the age of 16 years and 177 days. His contribution was instrumental in making Arsenal the 2003 premier league champion. He made another record of being the youngest ever goalscorer for Arsenal in a league cup match against ‘Wolverhampton Wanderers,’ which Arsenal won with a 5-1 margin of victory.

During the 2004-05 seasons, Cesc Fàbregas started making regular appearances for the first team of Arsenal and made an impressive contribution in defending their premier league championship title. In September 2004, he signed his first professional contract with Arsenal, his mentor club of his adopted country since 2003. During the 2004–05 UEFA Champions League, he was again in the limelight when he became the second youngest goalscorer in the history of the competition when he scored the third goal against Rosenborg in a 5-1 scoreline in favour of his club.

Cesc Fàbregas was selected for the starting eleven for the 2005 FA Cup Final, which his team won defeating another football giant of England, Manchester United on penalties. During the 2005-06 seasons, he played almost regularly for the first eleven of his club concluding the season with a total of 49 appearances in all competitions. He confirmed his commitment and allegiance to his club when on October 19, 2006; he signed a fresh five-year contract with Arsenal with a provision of further extending the contract for another three years.

The 2006-07 seasons were a busy learning curve for young Cesc Fàbregas. While he appeared in the entire final playing eleven and played every single league game for his club, Arsenal could not achieve any significant success and was defeated by the city rival Chelsea in the League Cup Final. His performance was quite impressive in the 2006–07 UEFA Champions League campaign of his team and was named in the 2006 UEFA Team of the Year.

Cesc Fàbregas was declared the ‘FA Premier League Player of the Month’ for January 2007 and was nominated for both ‘PFA Players' Player of the Year’ and ‘PFA Young Player of the Year.’ Cristiano Ronaldo of Manchester United eventually won both the awards. Additionally, Fàbregas was bestowed with the ‘Golden Boy Award’ by the Italian paper TuttoSport by a poll conducted among the sports journalists of Europe.

The 2007-08 seasons started amid desertion of the key players of Arsenal such as Thierry Henry, the all-time leading goal scorer, and captain of the team. The vice-chairman of the club David Dein left the club on the face of an alleged internal rift. The desertion made Fàbregas the most important and almost indispensable player for his club. He, however, started from where he left at the conclusion of the previous season, unperturbed by the happenings around his club and achieved many honours including the Premier League Player of the Month for September 2007.

In spite of his club’s misfortune of ending the season without any significant success, his curriculum vitae was continuously getting enriched by several awards. Cesc Fàbregas was the winner of the ‘PFA Young Player of the Year’ award for the 2007-08 seasons and was also named in the ‘PFA Team of the Year.’ He also won 2007-08 ‘Arsenal.com Player of the Season’ award.

During the 2008-09 seasons, Cesc Fàbregas was made the captain of team Arsenal. The honor was bestowed upon him on 24 November 2008, after his team had played its 14 league games of the season. However, a knee injury ruled him out for four months mid-way through the season, and Arsenal again failed to win any major trophy in that season. The 2009-10 and 2010-11 season unfolded similarly for Arsenal. Though Fàbregas was named in the ‘PFA Team of the Year,’ his club could not win any trophy all along the 2009-10 and 2010-11 season.

On 15 August 2011, Cesc Fàbregas was signed by FC Barcelona, the leading football club of his home country for a transfer fee of approximately $56 million. He enjoyed the massive success of his home team in his first season with an array of championship titles including the Spanish Super Cup, the UEFA Super Cup, the FIFA Club World Cup and the Copa Del Rey.

Cesc Fàbregas was also instrumental in the success story of Spain becoming the first ever country to win three consecutive international competitions including the 2010 World Cup and both the 2008 and 2012 UEFA European Championship. His representation for his country Spain includes 2006 FIFA World Cup, UEFA Euro 2008, 2009 FIFA Confederations Cup, 2010 World Cup, Euro 2012, 2013 Confederations Cup, the 2014 World Cup and Euro 2016.

In May 2018, Fàbregas married his long-time girlfriend Daniella Semaan with whom he has three children.