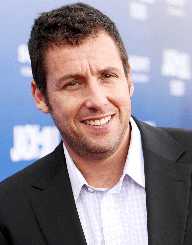 Adam Richard Sandler was born on September 9, 1966. He is an American actor, songwriter, comedian, musician and film producer. He is best known for comedies such as the ‘Wedding Singer’ and ‘Punch-Drunk Love.’ In his career, he has released five comedy albums. Adam is the founder of Happy Madison Productions. He has also received several awards for his comedic acts.

Adam Sandler was born on September 9, 1966, in Brooklyn, New York to Judith, a nursery teacher and Stanley Sandler who was an electrical engineer. Judith and Stanley had four children and Adam was the youngest. Adam attended Manchester Central High School. He was known as the class clown as he was very funny.

At 17 his brother encouraged him to perform at a Boston Comedy Club as he did not aspire to be a comedian. Performing at the Boston Comedy Club motivated Adam to take classes at the Lee Strasberg Theater and Film Institute in New York after he graduated High School to pursue a career in comedy. He later attended the Tisch School of Arts at New York University. In 1988, he graduated with a Bachelor’s Degree in Acting.

In the late 1980s, Adam Sandler appeared in television for the first time playing Theo Huxtable’s friend in ‘The Cosby Show’ and the Stud Boy in the MTV Game Show ‘Remote Control'. After appearing in these films he continued with standup comedy.

During one of his performances, he captured the attention of Dennis Miller (comedian). Dennis Miller recommended him to ‘Saturday Night Live (SNL).’ In 1990, he was employed as a writer on SNL. After several appearances on the show, he became a cast member. He worked for SNL from 1990 to 1995.

Adam’s films started receiving recognition in the 1990s. In 1993, he appeared in ‘Coneheads’ with David Spade and Chris Farley among other people. He co-starred in the film ‘Airheads’ in 1994 with Steve Buscemi and Brendan Fraser. In 1996, Adam Sandler received a lot of acclaim from the comedy film ‘Happy Gilmore.’

In 1998, he played a comedic role in ‘The Wedding Singer.’ In 1999, he founded his own company ‘Happy Madison Production.’ He has produced many films including the film ‘Deuce Bigalow: Male Gigolo.’ He made a lot of comedy albums such as ‘They’re All Gonna Laugh at You,’ ‘What’s Your Name?’, ‘What the Hell happened to Me?’ And ‘Stan and Judy’s Kid.’ Two of these albums were certified double platinum.

In the same year, Adam Sandler made a $1 million to the Boys and Girls Club in Manchester, New Hampshire. He also donated $2100 to former New York City Republican mayor Rudy Giuliani’s presidential Campaign. In 2014, Adam again proved his comedy prowess in the movie ‘Blended’ which was a box office success.

Adam Sandler won the Gijon International Film Festival Best Actor Awards for ‘Punch-Drunk Love.’ In 2014, he was named Male Star of the year at the CinemaCon Awards. He is also a recipient of several People’s Choice Awards including being Favorite Comedic Actor from 2012 to 2015 (four consecutive years).

Adam Sandler married actress Jacqueline Titone on June 22, 2003. They have two daughters together, Sadie and Sunny. Sadie was born in 2006 while Sunny was born in 2008. Adam has an estimated net worth of $360 million.