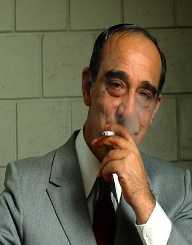 Carmine "The Snake" Persico was born in Red Hook, Brooklyn, New York on the 8 August 1933. His parents were Assunta Plantamura and Carmine John Persico. His brothers Alphonse and Theodore were both also involved in the Colombo, crime family.

Carmine Persico got involved in street gangs at a young age when he was part of a local gang, The Garfield Boys, eventually becoming their leader. Around this time, the early 1950s, he was involved in a shooting. The brothers slowly built up their reputation for toughness.

The Garfield Boys had an altercation with another gang, the Tigers. The fight was in front of the boathouse in Prospect Park and was over a girl; a scene later echoed in West Side Story. One Tiger gang member was shot dead and another severely wounded. By the age of 20, Persico had been arrested for murder on two occasions.

Carmine Persico then got involved, along with his brother, with the Profaci family, who were controlling Red Hook, Brooklyn. When Albert Anastasia was murdered as he was being shaved, Persico claimed to be one of the group referred to as the barbershop quartet (1957). No-one was ever charged for the Anastasia murder.

Carmine Persico was very close to Joe and Larry Gallo whom he had been involved with since the early 1950s in the Garfield Gang. When the Gallo’s wanted to leave the Profacis gang because they disliked Joe Profaci, induced Persico to try to kill Larry Gallo in 1961. The attempted murder resulted in a gang war, and the Gallos started referring to Persico as The Snake.

The attempt to kill Larry Gallo was echoed in the film Godfather II. In 1963, various incidents led to the Profaci crime family became the Colombo crime family, and Persico became a capo. During the next decade, Carmine Persico was involved with illegal gambling, organized murder, hijacking, extortion, and related crimes.

His capo becomes highly profitable until, in 1968, he was convicted of federal hijacking and sent to prison on the 27 January 1972 for eight years. Persico became the boss of the Colombo crime family in 1973. In 1987, he was sentenced to 139 years in prison.

It was reported in 2018 that the now 85-year-old Carmine Persico has various medical problems including heart problems, kidney disease, and emphysema. He is also blind in one eye. He applied for early release based on his health issues, but it was refused.

Over the years, his lawyers have continued to fight for his release on one occasion claiming to have supplied the court with proof via FBI documents that Persico was not the boss of the Colombo family when jailed.

His lawyers also don’t believe that persecutors have any evidence that he is a mafia boss today either. Persico’s son Alphonse, a former Colombo acting boss, is also serving a life sentence in prison. In 2018, Frank Dimatteo and Michael Benson published Carmine the Snake: Carmine Persico and His Murderous Mafia Family.