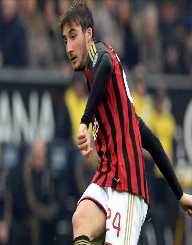 Italian professional footballer Bryan Cristante was born on the 3 March 1995 in San Vito al Tagliamento. He grew up in San Giovanni di Casarsa.

Bryan Cristante first played Champions League football when he was just sixteen. At age eighteen Cristante was playing for Milan when reached the final of the 2013 Torneo di Viareggio, an annual youth tournament. During that match, he received the best player award.

In 2013 AC Milan traded Cristante to Benfica. The decision to buy outraged fans. Bryan Cristante moved to the Portuguese club Benfica on a five-year contract on the 1 September 1014. His transfer fee was almost five million pounds. He made his debut for Benfica on the 12 December 2014 at Vitória Setúbal. Cristante scored his first goal for Benfica when the club was victorious over Arouca on the 14 January 2015 (4-0).

Bryan Cristante represents his homeland of Italy at youth international level, and as he holds dual citizenship, he also qualifies to represent Canada.