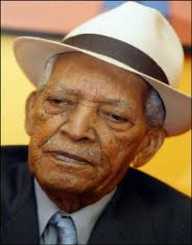 Compay Segundo was born as Máximo Francisco Repilado Muñoz Telles on November 18, 1907, in Siboney, Cuba. He was a reputed Trova guitarist, singer, and composer of Cuba.

When the Grammy-winning album ‘Buena Vista Social Club’ was recorded, he was the oldest acclaimed Cuban musician to have performed in the album. He also appeared in the 1999 film of the same name in a leading role. Segundo had a mixed ancestry, his father being of Andalusian heritage, and his mother being an Afro-Cuban.

Compay Segundo moved to Santiago de Cuba at the age of nine. The place is known as the birthplace of Cuba's national musical style called ‘son’. By the age of thirteen, he began playing guitar and tres (Cuba’s indigenous version of the guitar) in the bars of the city while working as a barber and tobacco picker during the day. He began writing his songs at the age of 15, most of which were lovelorn lyrics explicitly written for his love interest.

At this time around, he became a part of the Municipal Band of Santiago de Cuba, where he used to play the clarinet. He invented a seven-stringed guitar-like instrument named armónico. He used the instrument to adjust the harmonic jump between a Spanish guitar and a tres. Thereafter, in 1934, he moved to Havana and joined the municipal band of the city as a clarinet player.

Segundo formed a Cuban Trova duo ‘Los Compadres’ (The Friends) in 1942, along with his cousin Lorenzo Hierrezuelo. As he performed as the second voice of the duo, Lorenzo being the lead vocalist, became well-known as Compay Segundo (second friend). They performed a combo, playing indigenous Trova music featuring guitar, hand percussion instruments, and vocal harmonies. In 1957, he created his music group and named it Compay Segundo Y Sus Muchachos (‘Compay Segundo And His Boys’).

Two years after the formation of Segundo’s group, Cuba’s political scenario underwent a drastic change. In 1959, communist leader Fidel Castro came to power after a sustained revolutionary struggle. With the change of guard, Cuba became internationally isolated. Cut off from the rest of the world, Cuban music thrived on its own. With no outside influence, the traditional musical styles of Cuba remained unchanged for almost the next four decades.

As his country withstood a sustained boycott from the stronger capitalist forces, Segundo continued to work as a cigar roller at the H. Upmann factory, rolling out the world-famous Havana cigars. Besides, he and his band regularly performed in the Havana hotel bars during the 1960s.

At a later stage in the 1960s, he called it quits. There was a rumor in the market that he had passed away. He later clarified that he was intentionally lying low and was pursuing two activities simultaneously, performing as a musician as and when contacted by other musicians. For him, his profession as a cigar roller was just as important and essential as his music.

Compay Segundo rose to international fame well past his prime. He performed as one of the most veteran musicians in the Grammy Award-winning ‘Buena Vista Social Club’ album (1997). His lusty cigar-smoking baritone won many hearts.

He even gained more worldwide fame and recognition when he starred in the Wim Wenders award-winning feature documentary film ‘The Buena Vista Social Club’ (1999). Following the fame,  undertook a major European tour.

Compay Segundo retired from his job as a cigar-roller in 1972. However, he became actively involved in music again during the late 1980s. He traveled to Washington D.C. in 1989 as a member of the music group Cuarteto Patria. There, he took part in a concert at the Smithsonian Institute, churning out traditional Cuban music. During 1994, he toured Spain and performed at a festival in Seville.

He also appeared in a tiny Madrid club for a few nights. In November 1995, East-West Records executives signed him and recorded the album ‘Yo Vengo Aquí’ (1996). This followed two more consecutive releases of the album; ‘Antología’ (1997) and ‘Lo Mejor de la vida’ (1998). ‘Chan Chan’, the opening track of the Buena Vista Social Club album, is deemed to be the most famous composition of Segundo.

Following the revival of his career and gaining fame and recognition, Segundo continued to perform well past the age of 90. In 2000, he traveled to America and performed in front of Pope John Paul II at the Vatican City. He also performed for Cuban President Fidel Castro at a fiesta who checked his pulse and joked about his vitality.

Compay Segundo died on July 13, 2003, following complications of kidney failure. He failed to live up to his self-predicted age of 115. He used to take credit for his longevity and attributed it to his genes.