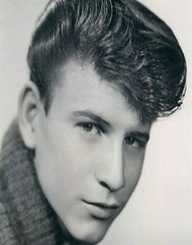 Bobby Rydell won a television talent contest when he was 9, held on Paul Whiteman’s TV Teen Club show.  The win earned him a role in the series.  Later, in his teens, he was the drummer for Rocco and His Saints, a Philadelphia rock and roll band. Frankie Avalon played trumpet in the band. Rydell was signed to Cameo Records, and in 1959, he charted with Kissin’Times.

In May 1960, Bobby Rydell toured Australia with Marv Johnson, The Everly Brothers, The Crickets and others. He went on to have over 34 Top 40 hits including Volare, Wild One, Swingin’ School and Forget Him. He starred with Ann-Margaret in the film Bye Bye Birdie (1963). He was also in the films Lady from Peking (1975) and Combat!: The Duel (1964).

Rydell has performed and toured extensively including 19 tours to Australia. In 1985, he began doing the Golden Boys of Bandstand show based on his music days with Fabian and Frankie Avalon. He performs on a regular basis in Atlantic City and Las Vegas.

The producers of the hit Grease acknowledged Bobby Rydell by naming the high school in the story Rydell High. The street on which Rydell was born in Philadelphia, was renamed Bobby Rydell Boulevard in 1995.

Rydell had a double organ transport in July 2012.

Bobby Rydell married Camille Quattrone in October 1968, and the couple remained married until her death in September 2003. They had two children together. In 2009, he married Linda Hoffman.