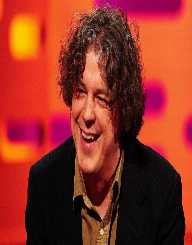 Alan Davies was born on March 6th, in 1966 in Loughton, Essex in England. He is famous for being a skilled stand-up comedian and an actor. One of the TV series that have made him famous was his role as Jonathan Creek in the BBC One series Jonathan Creek-1997. In addition to this, he is renowned for being a permanent panelist in the QI (Quite Interesting) quiz show of 2003.

Alan Roger Davies was born on March 6th, 1966. The young talented star spent most of his childhood years in Chingford. When he was only six years old, tragedy hit their family as his mother passed away. She died as a result of leukemia leaving young Davies to be raised by his loving father. While still living in Loughton, he schooled at Staples Road School. Later on, he completed his O-Level studies at the Bancroft's School. He went on to pursue his college education at Loughton College of Further Education. In 1988, Davies graduated from the University of Kent where he had been pursuing drama and theatre studies.

Immediately after graduating from the university, Davies took his career seriously and began performing as a stand-up comedian. Initially, he was entertaining people at the Whitstable Labour Club. Four years down the line, Davies had perfected his comic skills, and in 1991 he was recognized by the Time Out magazine as one of the leading young comedians in the industry. He kept his head high and continued performing all over the UK and in Australia. Around this time, he successfully took home the Critics Award for Comedy at the Edinburgh Festival held in 1994.

Things improved with the popularity that Davies was boasting of. In the period from 1994 -1995, he landed a career in the radio industry to host Alan's Big One radio show. It is also around this period that Davies appeared on the travel TV show called One for the Road.

In spite of the fact that Davies was enjoying the fame that he had gained through his stand-up comedic personality, his breakthrough came after featuring in Jonathan Creek. He was to play the lead role in the recurrent TV series from 1997. This was a show that changed the status of his career as he was now regarded as a TV icon. The series Jonathan Creek was awarded BAFTA for Best Drama.

A year later, Alan Davies came up with his radio show that he scripted called The Alan Davies Show. During the same year, he featured in A Many Splintered Thing, a TV series that was aired from 1998 to the year 2000. In 2001, he played the lead role in the British drama series Bob and Rose. This movie earned him a Best Actor award for his notable performance.

Alan Davies is also a renowned individual for the mere reason that he is a permanent panelist in QI- which stands for Quite Interesting. This is a quiz show that is aired on BBC Two channel.

Alan Davies tied the knot to Katie Maskell in 2006. Three years later, the couple celebrated the birth of their daughter Susie in 2009. Later on, in 2001, they had a son named Robert.