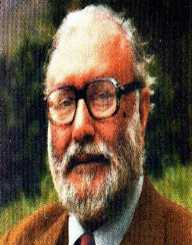 Being a Little Bit of Stardust: William Alfred Fowler

William Alfred Fowler was born on August 9, 1911, in Pittsburgh, Pennsylvania, United States of America. He was the son of John MacLeod Fowler and Jennie Summers Watson Fowler. He had a younger brother, Arthur Watson Fowler and a younger sister, Nelda Fowler Wood. His paternal grandfather, William Fowler, was a coal miner in Slamannan, near Falkirk, Scotland who immigrated to Pittsburgh to find work as a coal miner around 1880. His maternal grandfather, Alfred Watson, a grocer by occupation, had migrated to Pittsburgh also around 1880, from Tanioka, near Clare in County Armagh, Northern Ireland.

William Alfred Fowler's father was an accountant and was transferred to the steam railroad town of Lima, Ohio from Pittsburgh when William was two years old. He grew up in the city of Lima and attended the Horace Mann Grade School before graduating from the Lima Central High School in 1929. William’s deep interest and passion in the field of science and engineering was evident from an early age. After completing his high school graduation, William started studying Ceramic Engineering at the Ohio State University.

Later, William Alfred Fowler switched over to Engineering Physics due to his interest in the said subject field. In 1933, he secured his bachelor’s degree in Engineering Physics from Ohio State University and further went on to complete his postgraduate education from the California Institute of Technology. He received his Ph.D. in nuclear physics in 1936 from the same institute.

William Alfred Fowler earned his doctorate by submitting his doctoral thesis ‘Radioactive Elements of Low Atomic Number’ under the supervision and guidance of Charlie Lauritsen, who was said to have the greatest influence on his life. He was appointed as an assistant professor at his alma mater, the California Institute of Technology in 1939. When the World War II broke out, the Kellogg Laboratory at the California Institute of Technology was exclusively allotted for the purpose of defense research.

In 1944, William was sent to the South Pacific to support the American forces with his feedback and input. He stayed there for three months in a non-military capacity. In 1946, he was appointed as a full-time professor at the California Institute of Technology.

During the better part of the 1950s, William Alfred Fowler mostly became engaged in the research related to experimental physics and published his most acknowledged work ‘Synthesis of the Elements in Stars’. It was co-authored by E. Margaret Burbidge, Geoffrey Burbidge, and Fred Hoyle. The paper was published in 1957 and established the fact that in stellar evolution, elements are synthesized progressively from light elements to heavy ones, in nuclear reactions that also produce light and heat.

William Alfred Fowler was appointed as the director of the Kellogg Radiation Laboratory at the California Institute of Technology succeeding his mentor Charlie Lauritsen. He was also involved in the research related to the field of radio astronomy, working jointly with Fred Hoyle at the Institute of Theoretical Physics, which was established in 1966 at the University of Cambridge. Both his work on element generation at the Kellogg Radiation Laboratory and the work on radio astronomy were carried out simultaneously by him.

William Alfred Fowler was awarded Medal for Merit by the American President Harry Truman in 1948.

In 1956, he was elected as a member of the National Academy of Sciences.

He was also awarded the Barnard Medal for Meritorious Service to Science in 1965.

William was a member of the National Science Board between 1968 and 1974.

William Alfred Fowler received the G. Unger Vetlesen Prize in 1973, Eddington Medal in 1978 and the Bruce Gold Medal of the Astronomical Society of the Pacific in 1979.

He was designated Benjamin Franklin Fellow of the Royal Society of Arts in 1970.

William Alfred Fowler was awarded the National Medal of Science by President Gerald Ford in 1974.

He was designated as the Associate of the Royal Astronomical Society in 1975.

In 1976, William Alfred Fowler was elected to become the President of the American Physical Society and was designated as an Honorary Member of the Mark Twain Society, also in the same year.

He was elected to the Society of American Baseball Research during the 1980s.

William Fowler received the prestigious Nobel Prize in Physics in 1983 jointly with Subrahmanyan Chandrasekhar for his theoretical and experimental studies of the nuclear reactions of importance in the formation of the chemical elements in the universe.

William Alfred Fowler married Adriane Foy Olmsted on August 24, 1940. The family of his wife was initially from the plains and mountains of the western United States and later shifted their base during the Gold Rush of 1850. The couple was blessed with two daughters, Mary Emily and Martha Summers. William’s first wife Adriane died in the year 1988. In the following year, William got married to a grade school teacher and painter named Mary Dutcher.

Fowler breathed his last on 14 March 1995, in Pasadena, California due to kidney failure. He was aged 83 at the time of his death.