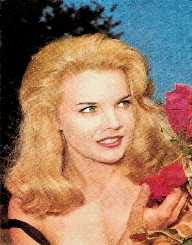 Carroll Baker is a retired American actress famous throughout the 1950s to 1960s for her film, stage, and television appearances. She is well known for her lead role in ‘Baby Doll’ of 1956 which earned her Academy Award nominations for Best Actress and Golden Globe award for Most Promising Newcomer that year. Other notable works include; ‘Giant’ (1956), ‘Something Wild’ (1961) and ‘How the West Was Won’ (1962). Remarkably, she has authored three books; an autobiography titled ‘Baby Doll’ in 1983, ‘To Africa with Love’ in 1986 and ‘A Roman Tale’ in 1987.

Carroll Baker was born on May 28, 1931, in Pennsylvania and was raised in a Catholic family. She is of Polish descent and the daughter of Edith Gertrude (nee Duffy) and William Watson Baker who was a traveling salesman.

When she was 8years, her parents separated and together with her younger sister they moved in with her mother to Turtle Creek, Pennsylvania. As a single parent, their mother struggled to raise them. Their family was poor throughout their upbringing. She attended Greensburg Salem High School in Pennsylvania where she was active in marching bands, school musicals and debate team member.

At the age of eighteen, Carroll Baker joined St. Petersburg College, and as a first-year student, she commenced to work as a magician’s assistant on the Vaudeville Circuit. At the same time, she joined a dance company where she worked as a professional dancer.

In 1949, she won the title Miss Florida Fruits and Vegetables. Later in 1951, she worked as a nightclub dancer after relocating to New York City. She also became a chorus girl in Vaudeville traveling shows.

In 1952, Carroll Baker enrolled at the Actors Studio where she studied under Lee Strasberg.
In the same year, she appeared in television commercials for Winston Cigarettes and Coca-Cola. She was also featured in an episode of Monodrama Theatre which was broadcast on Dumont Network.

A year later in 1953, she made her film debut with a small role in the musical ‘Easy to Love,' which landed her in two Broadway Production: Rodger MacDougall’s ‘Escapade’ and Robert Anderson’s ‘All Summer Long’ which ran from September to mid-November in 1954.

Baker’s first significant screen role was in ‘Giant’ of Luz Benedict II where she worked opposite Elizabeth Taylor and James Dean in 1956. Simultaneously, she was cast as the title character in ‘Baby Doll’ of Elia Kazan who was impressed by her performance in ‘All Summer Long on Broadway’ in 1955.

In 1956, a billboard was constructed in Times Square advertising the film, where Carroll Baker was depicted in the image of a scantily-clad lying in a crib sucking her thumb. This advertising caused a pre-emptive criticism from religious groups. It was formally condemned by the Roman Catholic who considered it offensive to Christian’s standards of morality and decency. Despite this ‘Baby Doll’ received $51,232 in its first week at Victoria Theatre, and Baker won immense praise for her performance establishing her as an A-list actress.

Due to her performance, Carroll Baker was nominated for both an Academy Award and Golden Globe for Best Actress. Fortunately, she won a Golden Globe for Most Promising Newcomer-with Jayne Mansfield and Natalie Wood.

Later she was also titled ‘Woman of the Year’ by the Look magazine in 1957 from Harvard University’s Hasty Pudding Club and appeared on the cover of Life Magazine in June 1956.

From the success of ‘Baby Doll,' Carroll Baker received a steady flow of films which required her to play the sex symbol but turned down almost all the movies. She chose to appear in 1958 ‘The Big Country’ of William Wyler. Additionally, she made lead roles in two romances, ‘The Big Country,' a nun in ‘The Miracle’ of 1959, and comedy in ‘But Not for Me’ in 1959.In 1961, she made an experimental film ‘Something Wild’ directed by her husband, Jack Garfein. This movie received negative criticism and nearly halted her career.

In the same year, Carroll Baker portrayed Gwen Harold in ‘Bridge to the Sun ‘which was well received by critics and was America’s entry to the Venice International Film Festival.

In 1962, she appeared in the Independent British-German film ‘Station Six-Sahara’ as well as the blockbuster western epic ‘How the West Was Won’ .in the fall of the year. Again, she appeared on Broadway starring in ‘Come on Strong’ of Garson Kanin.

In 1965, she traveled to Kenya and filmed ‘Mister Moses’ and appeared on the cover of Life’s magazine with Maasai warriors in July 1964 issue. Maasai are prominently a nomadic community in Kenya with a rich culture. Their culture is a major tourist attraction in the country.In December 1964, she appeared as a sex symbol in ‘Playboy’ issue followed by ‘Sylivai’ of 1965 where she was an ex-prostitute and con artist.

In 2000, she appeared in ‘Another Woman’s Husband’ followed by 2002 documentary ‘Cinerama Adventure’ and guest starred on an episode of ‘The Lyon’s Den.' She retired in 2003 with 50 years acting career and more than 80 roles in film, television, and theatre.

In 1957, Carroll Baker received the Golden Globe Award for New Star of the Year Actress and also won the Hasty Puddling Theatricals Award for ‘Woman of the Year.’
Moreover, in 2009, she received ‘The National Arts Medal Honor.'

Carroll Baker got into her first marriage in 1953, which ended a year later after she enrolled at the Actors Studio in New York. Then she married Jack Garfein and had two children; Blanche Baker born in 1956 and Herschel Garfein born in 1958. However, they separated in 1967, and she relocated to Europe with her children and eventually divorced in 1969.

In 1978, she met her third husband, Donald Burton, while touring Ireland and England during the production of ‘Motive.' The couple stayed together until Burton’s death from emphysema on December 8, 2007.