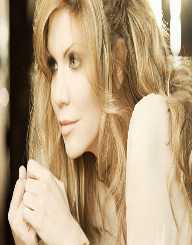 Alison Krauss was born 23rd July 1971, to Fred and Louise Krauss. She was born in Illinois, United States, in a town called Decatur. Her father taught German, which was his native tongue. Alison Krauss grew up with music from a young age. She studied classical violin from the age of five but changed to bluegrass a short time later. Alison Krauss was only eight years old when she started entering talent contests, and she had her band two years later.

She won her first contest when she was 13. It was the Walnut Valley Festival Fiddle Championship. Alison Krauss also received the Most Promising Fiddler in the Midwest Award by the Preservation of Bluegrass in America Society. All the members of her band first met Krauss when she was frequenting the music festivals.

Alison Krauss first entered the recording studio in 1985, performing on an album which featured her broth Viktor and other musicians. From 12 years of age, Alison Krauss performed as a fiddler for John Pennell’s band, Silver Rail. Pennell changed the name of his band to Union Station when he found out there was another band with the same name.

In 1990, Alison Krauss released her second solo album. Her contract with Rounder Records was such that she had to alternate her recordings between solo albums and group albums with Union Station. In 1993, Alison Krauss joined the Grand Ole Opry, a country music barn dance that broadcasts weekly on radio. She was the youngest cast member, and the first bluegrass artist in 29 years to perform with the Opry. Throughout the 1990s, Alison Krauss collaborated with other arts such as Crosby, Stills, and Nash, Kathy Mattea and Suzy Bogguss.

She also continued to release solo music as well as record with Union Station. Alison Krauss has continued this pattern through recent years and also began touring. In 2014, she toured with Union Station on the Willie Nelson and Family tour. Alison Krauss released a solo album in 2017, called, Windy City. It was her first solo album since 2010. She has made several guest appearances and collaborated on recordings with other artists over the years, including Phish, James Taylor, and Brad Paisley.

Alison Krauss has released 13 studio albums in all, six of her own, one with The Cox Family, and six with Union Station. She has made limited appearances in film and television, with two voice credits and a documentary on the film, and six television appearances. Surprisingly, Alison Krauss hasn’t done a lot of touring. She did tour in 2002, and she has done several smaller performances, such as Carnegie Hall and the White House.

In 1997, Alison Krauss married a fellow musician, Pat Bergeson. The couple had a son but divorced in 2001.