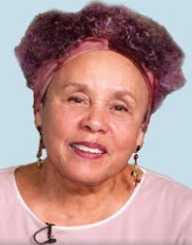 American artist Betye Saar was born Betye Irene Brown in Los Angeles on the 30 July 1926 in Los Angeles, California to Beatrice Lillian Parson and Jefferson Maze Brown. Her father died of kidney failure. After the death of her husband, Saar’s mother moved to Pasadena with her three children. They lived with Saar’s great-aunt, Hattie Keys and her mother worked as a seamstress. Her mother’s use of recycling discarded materials to make things her children needed later inspired Saar’s art.

Living in Los Angeles during the 1960s and 1970s. Betye Saar was influenced by black consciousness and feminism and incorporated these ideas into her art. By the late 1960s, she was sourcing caricatures of African Americans printed on packages, posters, and other objects, using them in her art in a satirical way.

She was influenced by the assemblage artist Joseph Cornell, and her early work reflects her mixed African-American, Native American and Celtic ancestry. Her breakthrough piece was The Liberation of Aunt Jemima (1972) in which she subverts the stereotypical mammy image by placing a gun as well a  broom in Aunt Jemima’s hands.

Betye Saar works with multimedia collages, box assemblages, using found materials and focuses on fragments of relics and ordinary objects using technology. Apart from feminist issues, Saar also explored African art and culture especially the meaning of rituals and the figure of the shaman. In the early 1980s, Saar began working on large site installations using technology to explore Voodoo traditions and mysticism. She also began teaching art at the University of California in the 1980s.

In 1999, her series Workers + Warriors echoed the image of Aunt Jemima which she had explored in her 1972 assemblage. Saar received a National Endowment for the Arts grant in 1974, and this made it possible for her to travel to Nigeria, México, and Haiti to explore her interest in sacred ritual, the occult, and mysticism. When her aunt Hattie Keys died in 1975, Saar inherited her belongings and used some of these in her art to reflect her family history.

Betye Saar's work Record for Hattie is a record of her aunt and their shared family history. Over the decades she had exhibited widely and has also taken part in group exhibits internationally. Saar’s work is in permanent collections in the San Francisco Museum of Modern Art, the University of California at Berkeley, the University of Massachusetts and other museums.

Betye Saar is the recipient of many awards including a Paul Getty Fund for the Visual Arts Fellowship (1990), a Flintridge Foundation Visual Artists Award (1998) and two National Endowment for the Arts Fellowships, one in 1974 and another in 1984.